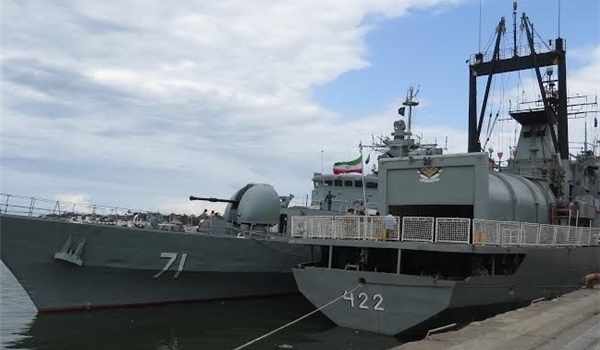 TEHRAN (FNA)- Iran’s Military Attaché in Sri Lanka Colonel Ebrahim Rouhani underlined that the presence of Iranian warships in the port of Colombo displays the high level of relations between the two countries.

“The presence of the army’s flotilla of warship in Colombo port shows our good relations with Sri Lanka,” Colonel Rouhani told FNA on Monday.

He underlined the importance of the Iranian warships’ visit to foreign countries and their presence in the waters of the Indian Ocean.

“The Indian Ocean is a stage for the big powers to display the power of their fleets, and the presence of this flotilla shows that we are active and powerful on this stage too,” Colonel Rouhani added.

Meantime, the Commander of Navy’s 33rd flotilla of warships Commodore Mohammad Reza Ahmadi Kermanshahi told FNA the presence of the flotilla will result in exchange of expertise and information between Iran and Sri Lanka.

He mentioned that the Navy’s 33rd flotilla had a two-week journey for 5,000 kilometers to reach Colombo.

The Iranian flotilla has several missions, including cadet training, and Commodore Ahmadi Kermanshahi said that the Navy cadets are undergoing practical training during the several-thousand-kilometer-long voyage.

The Iranian Navy’s 33rd flotilla of warships,, was welcomed at Colombo port by the Iranian embassy officials and Sri Lankan navy commanders.

The Iranian Navy’s 24th and 28th fleet of warships had also earlier docked in Sri Lanka.

The 33rd fleet of warships left Bandar Abbas port in Southern Iran for the Gulf of Aden late last month to protect the country’s cargo ships and oil tankers against pirates.