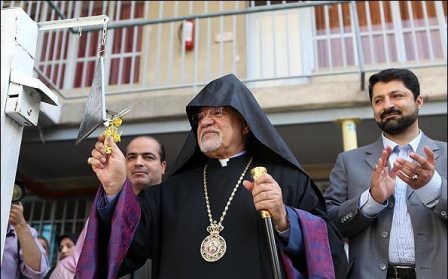 “The victory of the Islamic Revolution led by the late Imam Khomeini, revealed the Iranian identity to the international communities,” he stated.

The Armenian archbishop also expressed the hope that “dear Iran” would witness further prosperity under the leadership of Ayatollah Khamenei.

The Iranian nation toppled the US-backed Pahlavi regime 36 years ago, on February 11, 1979, ending the 2,500 years of monarchic rule in the country.

The Revolution, led by the late Imam Khomeini, established a new political system based on Islamic values and democracy.

Every year Iranians mark anniversary of their Islamic Revolution from February 1 to 11, known as the Ten-Day Fajr ceremonies. February 1, 1979 was the date when Ayatollah Ruhollah Khomeini returned from exile.

On February 11 each year, Iranian people pour into the streets in their millions to commemorate the great victory of the Islamic Revolution.