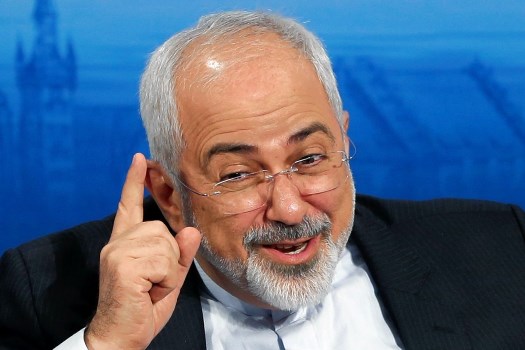 Iranian Foreign Minister Javad Zarif said at the Munich Security Conference on Sunday that the opportunity to reach a deal on Iran’s nuclear program must be seized. Photo: Associated Press

(Reuters) – Iranian Foreign Minister Mohammad Javad Zarif denied on Sunday a media report that he had told the United States during nuclear talks that President Hassan Rouhani’s political clout would be heavily damaged if negotiations failed.

A Reuters report on Saturday, quoting three senior Iranian officials who asked not to be identified, said Zarif had warned the United States and other Western powers during ongoing nuclear talks that a failure to reach a deal would likely hasten the political demise of Rouhani.

“I want to correct a very wrong report by Reuters,” Zarif told a security conference in Munich. “Those that talked to me in the past three days know that was not a subject of our negotiation,” he said, adding: “I did not.”

Reuters said it stands by its reporting.

Zarif said that if Iran and major world powers, including the United States, Germany,France, Britain, Russia and China, failed to reach an agreement it would not be Iran’s fault.

He said the negotiations had Rouhani’s support.

“I believe the entire Iranian population understands that this government, that Dr Rouhani, his administration, and the government in its entirety, supported our efforts in the negotiations,” said Zarif.

“Everybody has taken every necessary measure to make sure we succeed. All Iranians know this. If we fail, and I hope we won’t, they (Iranians) will not consider us responsible for that failure. They will consider attempts (to ask) too much from Iran as a reason for failure.”

The Reuters report quoted the three senior Iranian officials as saying a breakdown in talks would empower Iran’s conservative hardliners. The 12-year-old stand-off has reached a crucial phase, with a March deadline to reach a political agreement ahead of a final settlement by June 30.