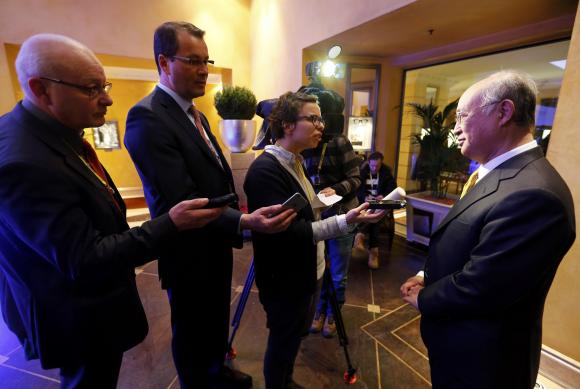 (Reuters) – Talks between Iran and the International Atomic Energy Agency (IAEA) have reached a “crucial” juncture and Tehran needs to provide urgent clarification on key aspects of its nuclear program, the IAEA’s chief said on Saturday.

Iran and world powers hope to clinch a final deal by June 30 that would end Western economic sanctions against Iran in return for curbs on its nuclear program. Parallel to those negotiations, the IAEA is also conducting its own investigation into Iran’s atomic program.

IAEA Director General Yukiya Amano told Reuters in an interview Iran needed to step up its talks with his agency.

“We are at a very crucial moment. So we need to further intensify our efforts to clarify the past issues and get prepared for the future issues,” Amano said on the sidelines of the Munich Security Conference.

Amano said the possible military dimensions of the Iranian program and unannounced inspections outside declared nuclear sites — seen as a vital tool of the IAEA under the so-called Additional Protocol — were issues where the U.N. nuclear watchdog was seeking further clarification.

“Iran has to implement the measures that they have agreed… Clarification of issues with possible military dimension and implementation of the Additional Protocol and beyond is essential,” Amano said after meeting Iran’s foreign minister, Mohammad Javad Zarif, in Munich.

“By no means, this (IAEA investigation) is not an open-ended, this is not an endless process. With the reasonable or full cooperation from Iran we can clarify the issue with a reasonable time frame.”

The West suspects Iran of plotting to build a nuclear weapon, something Tehran strongly denies.

Last November, the IAEA issued a report saying that Iran was failing to fully address suspicions that it may have worked on designing an atomic bomb.

The next detailed report is expected later this month, but Amano declined to comment on it.

“Today I had a meeting with Minister Zarif and we agreed to intensify the high-level talks between Iran and IAEA,” he said, adding that no date had been set for their next meeting though he expected the talks to become more frequent.