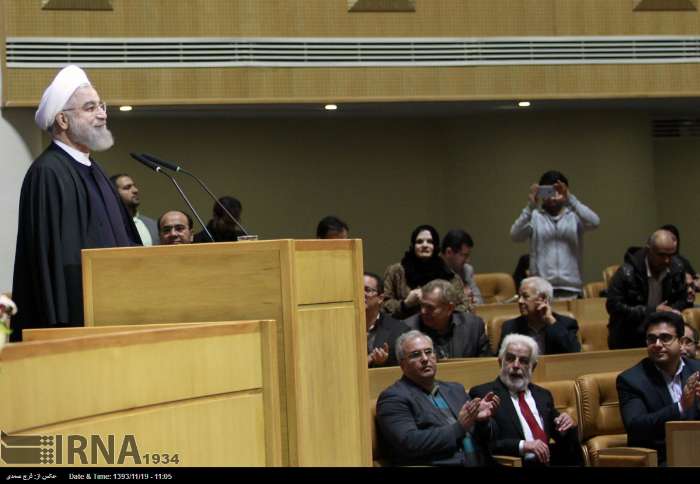 In an address to a cultural ceremony in Tehran on Sunday, President Rouhani said the elites should introduce the nature of the Islamic Revolution and the religion of mercy, Islam, to the world.

“Extremism, homicide and terrorism not only do not originate from Islam, but also have no connection with our…Islam,” he added.

In recent weeks, following terrorist attacks in France and the burning alive of a Jordanian pilot by the ISIL Takfiri terrorists in Syria, Iranian officials have raised the alarm over the spread of Islamophobia by foreign media.

In a January 29 letter to the UN secretary general, Iranian Foreign Minister Mohammad Javad Zarif stressed that “senseless resorts to violence” has no place in Islam and its teachings.

“The fact that such senseless resorts to violence has no place in Islam and its exalted teachings, nor acceptable to Muslims, is not in doubt; notwithstanding the campaign by the perpetrators, promoters of Islamophobia try to depict it (Islam) otherwise,” Zarif noted.

Earlier on January 21, Supreme Leader of the Islamic Revolution Ayatollah Seyed Ali Khamenei wrote a letter in English asking European and North American youths not to judge Islam based on the recent terrorist attacks in Paris.

In his historic letter, Imam Khamenei asked Western youths to try to gain a direct and firsthand knowledge of the religion in reaction to the flood of prejudgments and disinformation campaigns.

“Don’t allow them to hypocritically introduce their own recruited terrorists as representatives of Islam,” Ayatollah Khamenei stressed in the letter.