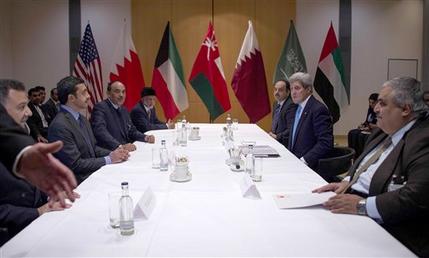 MUNICH (AP) — U.S. Secretary of State John Kerry on Friday pressed Iran’s foreign minister on the Obama administration’s desire to reach the outline of a nuclear deal by the end of March, in keeping with a target set by negotiators last year.

Kerry delivered the message to Iranian Foreign Minister Mohammed Javad Zarif during a two-hour meeting on the sidelines of an international security conference in Munich, according to a U.S. official. Kerry “reiterated our desire to move toward a political framework by the end of March,” the official said. “They agreed to stay in close touch and that they would try to meet again soon.” The official was not authorized to discuss the meeting publicly and spoke on condition of anonymity.

The five permanent members of the U.N. Security Council and Germany will resume negotiations with Iran soon, with an eye on the March target they set in November after missing two earlier deadlines. Their ultimate goal is to reach a final agreement by July that would, in exchange for a lifting of sanctions, address international concerns that Iran may be using a civilian atomic energy program as cover to try to develop nuclear weapons.

Despite assurances from the administration that it will not accept any deal with Iran that allows the capability to construct a bomb, the prospect of an agreement that may only keep Iran on the threshold of such a step has alarmed many allies, including Israel and the Gulf Arab states, along with many in Congress.

Meeting later with foreign ministers and senior officials from the Gulf Cooperation Council – Bahrain, Kuwait, Oman, Qatar, Saudi Arabia and the United Arab Emirates – Kerry pledged anew that “no deal is better that a bad deal,” according to senior U.S. officials who attended the session.

The officials said the Gulf state representatives and Kerry also discussed the situation in Yemen, where Iranian-linked Shiite rebels dissolved parliament and declared themselves in charge of the country earlier Friday. The Gulf Arabs expressed interest in the international community taking a stronger position on the developments, which the United States and others have already denounced, the officials said.

Kerry “challenged” the ministers to also speak publicly about their stances and urged them to remain in contact with various factions on the ground, the U.S. officials said.