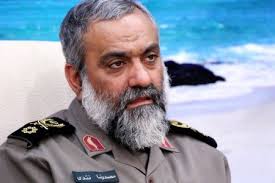 Basij commander: No compromise with US

TEHRAN (FNA)- Commander of Basij (volunteer) Force Brigadier General Mohammad Reza Naqdi underlined Iran’s eye-catching progress and self-sufficiency in different technological and scientific fields, and said the Iranian nation will not compromise with the US.

He said in today’s world, certain world nations still fear Washington’s expired awe, “but if they become aware of the realities and problems of the US, they will overcome it”.

In relevant remarks on Tuesday, Iranian President Hassan Rouhani said that firm will and logical approaches of the country’s nuclear negotiators and meantime Tehran’s transparent cooperation with the UN nuclear watchdog have left no way for the six major world powers but to accept Iran as a nuclear state.

President Rouhani said that the West seems to have come to the understanding that it needs to recognize the Iranian nation’s rights.

He also expressed content with the trend of the developments over the country’s peaceful nuclear drive.

Fortunately, the trend (of Iran’s nuclear issue) is proceeding within the framework set by Iran, added President Rouhani.

Both Iran and the Sextet of world powers have underlined that cutting a final deal before the July 10 deadline is possible.