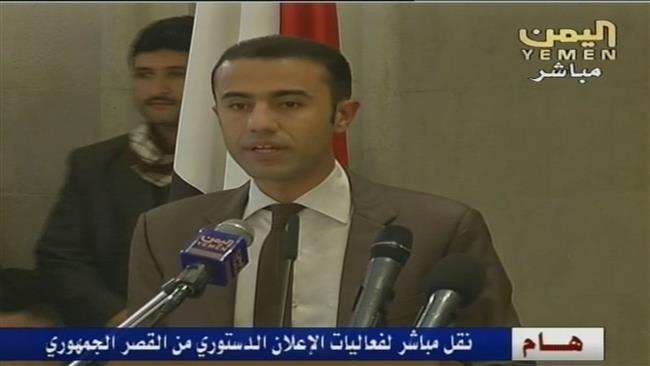 An unidentified spokesman for the Yemeni Houthi movement announces a constitutional declaration on Yemen’s National Transitional Council on February 6, 2015.

An unidentified spokesman for the movement announced the declaration in a televised statement from the Republican Palace in the capital, Sanaa, on Friday.

Under the declaration, the Yemeni Shia movement dissolved Yemen’s parliament and announced the formation of a transitional “presidential council” which will act as a government for an interim period of two years.

The constitutional declaration further said that a “transitional national council of 551 members,” which will replace the parliament, will be set up to elect the five-member “presidential council.”

The move by the Houthi movement came after the United Nations hosted a new round of talks between political factions in Yemen a day after a deadline set by the movement for Yemeni parties to resolve a power vacuum expired.

During the talks, most political factions in Yemen reportedly agreed to establish an interim presidential council to administer the country’s affairs.

Except for the Salafist Islah party, all other parties attending the negotiations in the capital agreed that a five-member presidential council handle the affairs in the crisis-hit country, Reuters reported.

The warring sides held the talks in a bid to find a solution to get the impoverished country out of the current political standstill.

The Houthi movement, which controls Sana’a, issued no statement after its deadline expired Wednesday, apparently waiting for the UN to speak out on the fate of the talks.

On Sunday, the movement set a three-day deadline for the parties to resolve the political impasse that emerged after President Abd Rabbuh Mansur Hadi and Prime Minister Khaled Bahah offered their resignation last month.

Political factions said they failed to reach an agreement on Wednesday, but UN special envoy to Yemen, Jamal Benomar, said the talks would continue.

Thousands of Yemenis took to the streets on Monday in support of the Houthis, demanding an end to the country’s persisting political deadlock.