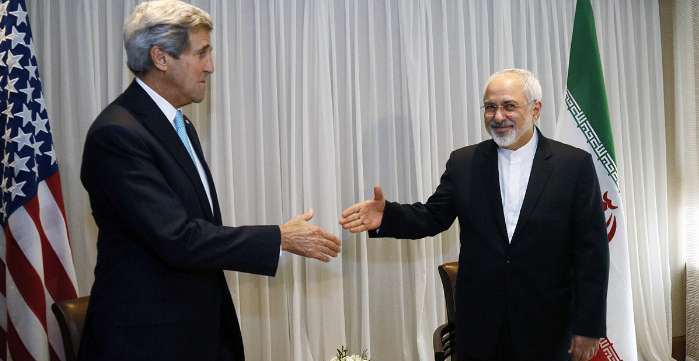 VIENNA (AP) — With time for negotiations running short, the U.S and Iran are discussing a compromise that would let Iran keep much of its uranium-enriching technology but reduce its potential to make nuclear weapons, two diplomats tell The Associated Press.

Such a compromise could break the decade-long deadlock on attempts to limit Iranian activities that could be used to make such arms: Tehran refuses to meet U.S.-led demands for deep cuts in the number of centrifuges it uses to enrich uranium, a process that can create material for anything from chemotherapy to the core of an atomic bomb.

Experts warn that any reduction in centrifuge efficiency is reversible more quickly than a straight decrease in the number of machines, an argument that could be seized upon by powerful critics of the talks in the U.S. Congress.

The diplomats are familiar with the talks but spoke only on condition of anonymity because they are not authorized to discuss them. Ahead of a new round of negotiations this week, they said there is no guarantee that the proposal can be finessed into an agreement.

According to the diplomats, the proposal could leave running most of the nearly 10,000 centrifuges Iran is operating but reconfigure them to reduce the amount of enriched uranium they produce.

One of the diplomats said the deal could include other limitations to ensure that Tehran’s program is kept in check.

For one, Iran would be allowed to store only a specific amount of uranium gas, which is fed into centrifuges for enrichment. The amount of gas would depend on the number of centrifuges it keeps.

Second, Iran would commit to shipping out most of the enriched uranium it produces, leaving it without enough to make a bomb. Iran denies any interest in nuclear weapons and says its program is for peaceful uses such as nuclear power and medical technology.

In Washington, State Department spokeswoman Jen Psaki said there is a range of discussions going on, focused on cutting off the different pathways for Iran to potentially arrive at a nuclear bomb.

“There are many pieces of the puzzle that need to be put together,” Psaki told reporters. These include how many centrifuges Iran operates and how they operate, she said.

Iran offered last year to reduce the output of its centrifuges if it could keep most of them going. That was rejected back then by the U.S. and its five negotiating partners. But both sides are under increasing pressure ahead of two deadlines: to agree on main points by late March, and to reach a comprehensive deal by June 30.

The latest negotiations have been extended twice, strengthening skepticism from both hardliners in Iran and critics in U.S. Congress.

Failure this time could result in a push for new sanctions by influential U.S. legislators, a move that some Iranian officials warn would scuttle any future diplomatic attempts to end the standoff.

The talks increasingly have become a dialogue between Washington and Tehran. Russia, China, Britain, France and Germany are also at the table but recognize that the U.S and Iran stand to gain – or lose – the most.

Iran now has withstood a decade of diplomatic and economic pressure aimed at reducing its program. Washington demanded a year ago that Tehran reduce the number of operating centrifuges from nearly 10,000 to fewer than 2,000. That would increase the time it would need to make enough weapons-grade uranium from a few months to a year or more.

By November, when the talks were extended, diplomats said the U.S. and its partners were ready to accept as many as 4,500 but Iran had not significantly budged.

The possible compromise was revealed ahead of the next negotiating round on the sidelines of the Munich Security Conference that starts Friday.

Centrifuges are set up in series – called cascades – to spin uranium gas to increasingly higher concentrations of enriched uranium. The diplomats said one possibility being discussed is changing their configuration to reduce the amount of enriched uranium produced at the tail end of each cascade.

Iran could try to re-pipe the cascades into their original setup. But that could take months, and such attempts would be quickly reported by the U.N.’s International Atomic Energy Agency, which would monitor Iran’s compliance with any deal.