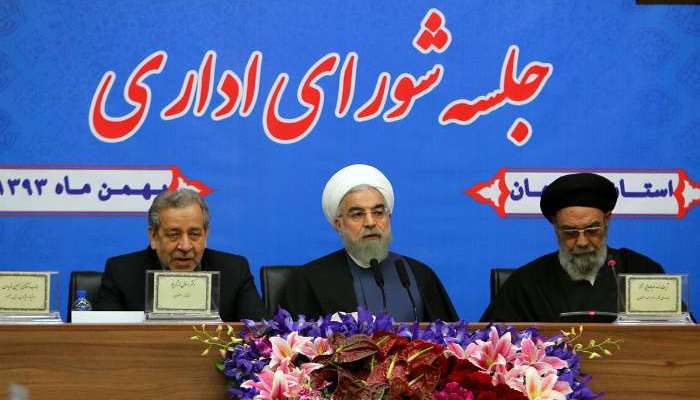 Rouhani: Chains of arbitrary sanctions should be torn out

Isfahan, Feb 5, IRNA – President Hassan Rouhani said on Thursday that the chains of the arbitrary sanctions imposed on Iran in contravention of the International Law should be torn out thanks to national solidarity.

Speaking to officials in Isfahan, President Rouhani said if Iran successfully lifted the unfair sanctions during nuclear talks, it should be regarded as a great task.

Recovery of the losses due to unfair sanctions is not an easy task; he said adding that the Iranian nation can overcome sanctions like the era of eight years of sacred defense 1980-1988.

Nuclear talks is a very complicated issue, he said adding that Iran withstood the hardship in the eight years of sacred defense thanks to sacrifices the brave young combatants made and the nation will do the same in nuclear talks as well.

Iranian diplomats and nuclear negotiators on the frontline play epic role, he said.

Once the enemies tried to force Iran put aside enrichment of uranium but the issue has been resolved and Iran can continue with uranium enrichment without any obstacle, he said.

There is no doubt Iran should maintain Arak reactor, he said adding that the country is determined to protect its achievements and to continue the path.

In the future, we will explain the Iranian nation the invaluable efforts have been made in nuclear talks, he said.