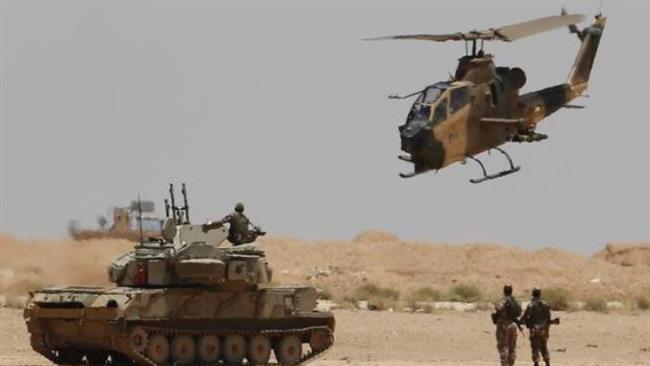 A Jordanian military helicopter flies over an armored vehicle near the Karameh border crossing on the Jordanian-Iraqi border.

Jordan is considering a military ground campaign against the ISIL Takfiri militants currently wreaking havoc on Iraq and Syria, a report says.

The Jordan-based daily newspaper Al Arab Al Yawm reported on Thursday that Jordanian officials are mulling a “quick-strike, lightning blow” against the terrorist group, according to the Israel daily newspaper JPost.

The report also said that the Jordanian government would then re-evaluate its strategy within the framework of the US-led coalition purportedly fighting the ISIL Takfiri group,

The video showed Kassasbeh dressed in an orange jumpsuit and surrounded by flames of fire inside a metal cage.

The pilot was captured by ISIL militants in December when his plane came down in northern Syria, during a mission against the terrorist group.

On Wednesday, Jordan’s King Abdullah II vowed that his country will avenge the killing of the 26-year-old pilot by waging a “relentless” war against ISIL terrorists.

“We are waging this war to protect our faith, our values and human principles and our war for their sake will be relentless and will hit them in their own ground,” state television quoted Abdullah as saying during a security meeting.

Mohammad al-Momani, Jordanian government spokesman, also said on Wednesday that “we are talking about a collaborative effort between [US-led] coalition members to intensify efforts to stop extremism and terrorism to undermine, degrade and eventually finish Daesh.”

Daesh is used as an Arabic acronym for the ISIL.

“All the state’s military and security agencies are developing their options. Jordan’s response will be heard by the world at large but this response on the security and military level will be announced at the appropriate time,” Momani said.

The Takfiris control swathes of land in Syria and Iraq and have been carrying out horrific acts of violence such as public decapitations and crucifixions against all communities such as Shias, Sunnis, Kurds and Christians.