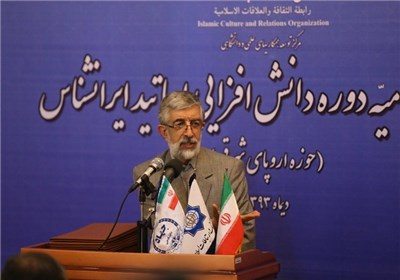 TEHRAN (Tasnim) – A senior Iranian cultural official highlighted the importance of bilateral relations between Tehran and Cairo in the area of culture, saying that the two countries are “two large wings” of the Muslim world.

“The Muslim world has two large wings, Iran and Egypt,” Director of the Academy of Persian Language and Literature Gholam-Ali Haddad Adel said in a ceremony attended by a number of Egyptian academics in Tehran on Wednesday.

Both Iran and Egypt contributed to the promotion of the Islamic culture and civilization, he added.

“Throughout the history, the Iranians and Egyptians have had long-lasting relations and also today, the Iranian people like the Egyptians,” Haddad Adel noted.

He also pointed to the problems facing the Muslim world, including what is happening in Iraq, Lebanon, Syria, Egypt, Bahrain, Yemen, Afghanistan, Pakistan, Tunisia and Libya and expressed the hope that peace and stability would be restored to all Islamic countries and the problems would be settled.

Back in December, Iran attended an international conference on fight against terrorism and extremism in the Egyptian capital of Cairo.

The conference came a few weeks after hundreds of Muslim scholars from various sects, including Shiites and Sunnis, and from 83 countries, including Egypt, gathered in Iran’s holy city of Qom on November 23 to take part in an international conference on dangers of Takfirism.