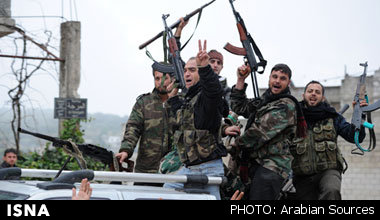 Source rejects reports on arrest of Iranian in Syria

TEHRAN (ISNA)- An Iranian informed source in the country’s embassy in Syria rejected Reuters report that terrorist groups in the country have arrested an Iranian.

The report is absolutely unfounded, the informed source told ISNA.

Reuters claimed that a mainstream Syrian rebel group were seeking to swap an Iranian allegedly taken captive in the southwestern province of Deraa last month for women held in Syrian government jails.

Last month several insurgent groups including the Sham Unified Front launched a major offensive in the province of Deraa.

The group’s leader Abu Ahmad claimed his rebels captured the Iranian as he was fighting alongside government forces in the province, and killed nine other soldiers.

“We questioned him through a translator, he came to Syria last year, he is a 30-year-old and he comes from (the Iranian) city of Qom,” Abu Ahmad, who was not using his real name, told Reuters.