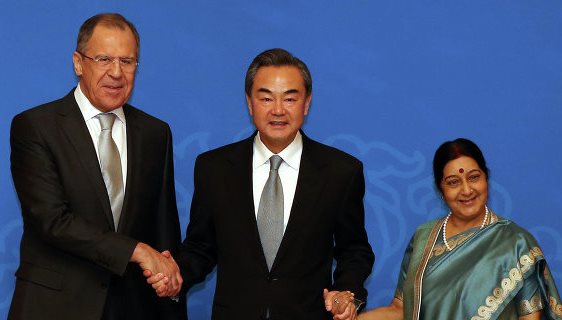 Russia, India and China “affirmed their support for efforts to seek a comprehensive and long-term solution to the Iranian nuclear issue through political and diplomatic means”, according to a joint communique of the countries’ foreign ministers’ meeting.

MOSCOW, February 2 (Sputnik) — Russia, India and China are in favor of increased diplomatic efforts between Iran and the P5+1 group of international negotiators to resolve the issue of Iran’s nuclear program, a joint communique of the countries’ foreign ministers’ meeting said Monday.”The Ministers affirmed their support for efforts to seek a comprehensive and long-term solution to the Iranian nuclear issue through political and diplomatic means. They welcomed the extension of negotiations between P5+1 and Iran, and hoped that the two sides intensify diplomatic efforts with a view to reaching a comprehensive agreement at an early date,” the communique said.

The ministers encouraged cooperation between the International Atomic Energy Agency (IAEA) and Iran and said that once IAEA confirmed the peaceful nature of the Iranian nuclear program the country would be able to have all the benefits of the peaceful use of nuclear energy.

Other issues discussed by the foreign ministers of the three countries included the situation in Syria and Iraq, and the crisis in Ukraine.Russian Foreign Minister Sergei Lavrov, Indian Foreign Minister Sushma Swaraj and Chinese Foreign Minister Wang Yi met on Monday in Beijing to discuss global issues and review progress in their cooperation since the last meeting, in New Delhi in November 2013.

After years of talks, in November 2013, Iran and the P5+1 group, comprising Russia, the United States, the United Kingdom, France, China and Germany, agreed to prepare a document ensuring the peaceful nature of Tehran’s nuclear energy program, but the parties reached only an interim accord.

During talks held in Vienna in November 2014, the sides again failed to work out a comprehensive deal and extended negotiations until July 2015.