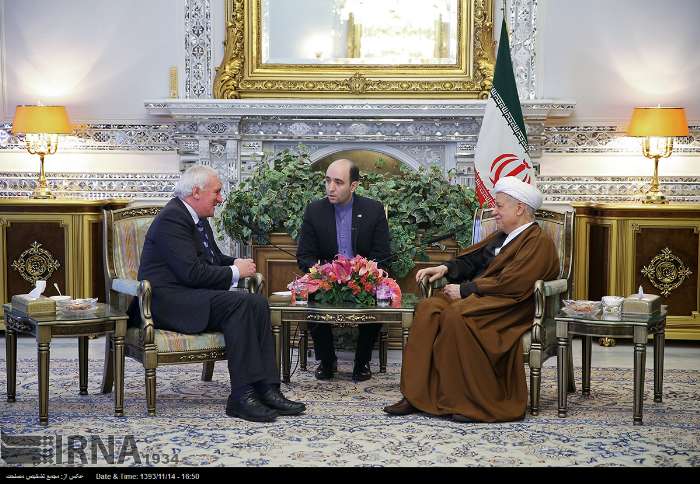 TEHRAN (FNA)- Chairman of Iran’s Expediency Council Akbar Hashemi Rafsanjani said the United States’ domestic disagreement over a deal with Iran has blocked the path towards a negotiated end to the nuclear standoff between Tehran and the West.

“Iran is serious in the negotiations and in defending its nuclear rights, but there are domestic problems in the US that have even slowed down the European countries in reaching an agreement with Tehran,” Rafsanjani said in a meeting with former Irish Prime Minister Bertie Ahern in Tehran on Tuesday.

The chairman of Iran’s expediency council voiced his astonishment over the political inconsistencies and contradictions in the European countries, and said, “What kind of political wisdom is it to disrupt the tranquility in a country and cause economic problems through creation insecure conditions.”

Rafsanjani said that the West is used to ending its military presence in other countries after creating and increasing insecurities in those countries, and lamented that “the Americans make mistakes and unfortunately the Europeans follow suit.”

In relevant remarks on Sunday, Iranian Parliament Speaker Ali Larijani stressed that US President Barack Obama should account for any possible failure in the nuclear talks between Tehran and the world powers.

“The US president has said recently that they pressure Iran to accept their view on the nuclear issue. Now the goal that they pursue through holding negotiations with Iran has become clearer, they say that we should surrender to their demand. In which part of the world such a behavior is called negotiation,” Larijani said, addressing an open session of the parliament in Tehran.

He underlined Obama’s inability to take a wise decision given the internal pressures he is facing, adding that he wanted Iran to surrender to Washington’s irrelevant demands or lead the negotiations into failure.

“The US president should know that the Iranian nation will not surrender and with such a wrong policy in the negotiations, he should account for the failure of the talks,” Larijani underscored.

His remarks came after the US congress (mostly grabbed by the Republicans) threatened to impose new sanctions against Iran, an issue which has been described as a redline by Tehran in the interim nuclear agreement reached with the world powers in November 2013.

In January, Iranian Foreign Minister and top negotiator Mohammad Javad Zarif called on the US officials to stop the policy of pressures against Tehran, adding that the negotiations with the world powers had entered a complicated stage.

“If the Americans want to reach results, they should put an immediate end to the dangerous game of pressuring Iran,” Zarif told reporters in Tehran.

Elaborating on the latest round of talks between Tehran and the G5+1 which was held in Geneva last month, he said, “The negotiations have become very complicated and we are studying the details. Positions on general points are clear; we have been studying the details for a long time.”

“As I have repeatedly stated, the principle of enrichment, the necessity for removing the sanctions and preserving Iran’s nuclear program have all been accepted and we have been negotiating on details for several months now,” Zarif said.

Asked if the Iranian side was ready to reach a comprehensive agreement with the world powers by mid March which marks the new Iranian year, he said, “We believe that if the other side shows determination and good will, one week will be enough for reaching an agreement” and the Iranian side was ready for a final deal by the anniversary of the victory of the Islamic Revolution in Iran on February 11.