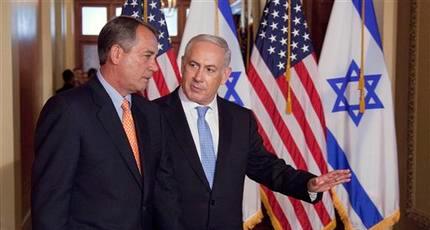 “I think you’ll find some bipartisan support in the Congress for the concerns the prime minister has about the ongoing negotiations with Iran,” Ayotte, Republican of New Hampshire, said on “Fox News Sunday”.

Sen. Ayotte made the remarks when asked about the recent spat between the Obama administration and House Republicans after Speaker John Boehner, Republican of Ohio, surprised many by inviting the Israeli premier to address a joint session of Congress without consulting with the White House.

The invitation was extended hours after US President Barack Obama threatened to veto any Iran sanctions bill during his State of the Union address on January 20.

Netanyahu’s speech is scheduled for March 3, two weeks before the Israeli premier stands for reelection on March 17.  The White House has denounced the move as “a breach of protocol,” and said Obama would not meet with Netanyahu when he visits Washington.

The hawkish Israeli prime minister has repeatedly questioned the Obama administration’s support of diplomacy with Iran.

Iran and the P5+1 group- the US, France, Britain, Russia, China and Germany – are in talks to narrow their differences and pave the way for a final, long-term agreement over Iran’s nuclear energy program.

“Congress would like a say in this agreement because many on both sides of the aisle are concerned that we have a strong, verifiable agreement that really ends their nuclear program,” Sen. Ayotte said.

The Republican-controlled Congress is pushing a new round of sanctions on Iran, despite the veto threat from the White House and warnings that additional sanctions at this juncture risked derailing the nuclear talks.

The US Senate Banking Committee approved a controversial bill last week that would trigger sanctions if the negotiations fall apart. The full Senate is expected to vote on the bipartisan legislation, co-authored by Senators Robert Menendez and Mark Kirk, on March 24.

Republican Senators Lindsey Graham and Bob Corker have also teamed up to craft a new bill that would require the White House to receive congressional approval for any nuclear accord with Tehran.

The legislation would set a “harmful precedent” that would harm negotiations with Iran, White House spokesman Josh Earnest said on Thursday.