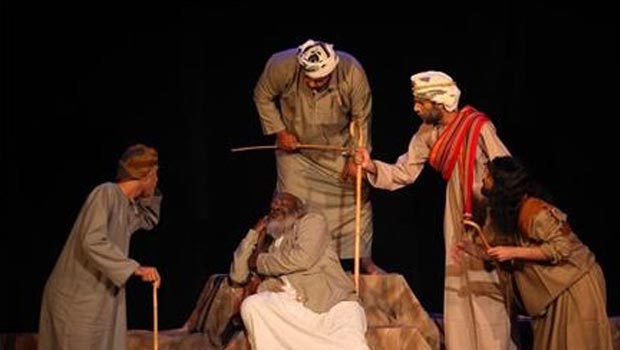 ‘Bazar’, which marked the Sultanate’s first participation at the annual Fajr International Theater Festival in Tehran, narrates the story of two young people who are in love. – Photo supplied

Muscat: An Omani troupe brought ‘human values’ to the forefront when it recently performed at one of the most important international theatre events in Iran.

‘Bazar’, which marked the Sultanate’s first participation at the annual Fajr International Theater Festival in Tehran, narrates the story of two young people who are in love with each other but are separated because they belong to different sides of a long-running dispute over a well in their village.

The 33rd Fajr International Theater Festival, which kicked off on January 21 and runs until February 1, features performances by over 80 theatre troupes from Iran and other countries.

Hailed by Iranian media
According to the Fajr festival report, the play, which was directed by Idris Al Nabhani and went on stage on January 25, sought to revive human values lost in fighting that broke out between the two groups.

Iranian media hailed the theme of the play and the performance, which was accompanied by traditional music and choreography.

It had also participated in the Gulf Theater Festival in Sharjah.

Presented a memento
Prior to the show, Saud bin Ahmed bin Khalid Al Birwani, the Sultanate’s ambassador to Tehran, presented a memento to Ardeshir Salehpour, the secretary of the Fajr International Theater Festival, which provides a platform for the exchange of knowledge and experience between Iranian and international theater troupes.

Untapped potential
Iranian and Omani officials have repeatedly underlined the importance of utilising the untapped potential for cooperation in the fields of art and culture.

During a seminar on the sidelines of the festival, Al Nabhani, the director of the play, touched upon the friendship between Iran and Oman and said that Oman is seeking to keep its ancient traditions alive through theatrical performances.

The Iranian media has reported that the Omani troupe had the highest respect for the audience and treated them with Omani Kahwa and Halwa as part of their efforts to promote the Omani culture among Iranians.

Appreciated
The audience also appreciated the fact that a Persian translation of the summary of the play, which was performed in Arabic, was handed over to them before the show to help them better understand the play.

Also, the critics noted that the group was totally professional and the play set a very high standards as the first Omani theatre in Iran.