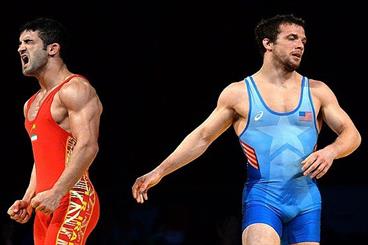 Masoud Esmaeilpour, wrestling down a category, 65kg, with poor preparation, got a rest draw in the first round; in second round, Esmaeilpour crashed French Sarkis Gregorian 10-0 in a brilliant performance. In quarterfinals, he won Hungarian wrestler Stefan Nemeth with a similar 10-0 result, and in semifinals, defeated Azerbaijan’s Haji Aliyev, but lost 3-6 to Azerbaijan’s Dagistani wrestler Magomed Muslimov in final to finish with a silver. Azerbaijna’s Haji Aliyev and American Brent Metcalf shared the bornze in 65kg category.

Iran’s world bronze medalist Mohammad Hossein Mohammadian finished with another silver behind Sharifov. Mohammadian who was a new comer in category 97kg, pinned Zhao Cheng from China 11-0 and defeated French Miller 10-0 to qualify for semifinals where he won Ukrainian European gold medalist Powel Olynyk 6-2. In final match, Mohammadian stormed in a breathtaking fight with Sharif Sharifov, but defeated 4-6 to find a silver medal.

Junior world champ Khadjiev, meanwhile, fell in the semifinals to Osman ISAKOV (RUS), 5-5, on criteria but stormed back for a bronze medal by pinning Giorgi TIGISHVILI (GEO) at 4:39 of their third-place bout.

In second and final day of the tournament, Iran’s Iman Sadeqi in 61kg category, Hassan Yazdani in 70kg and Alireza Karimi in 86kg categories will meet their challenges.