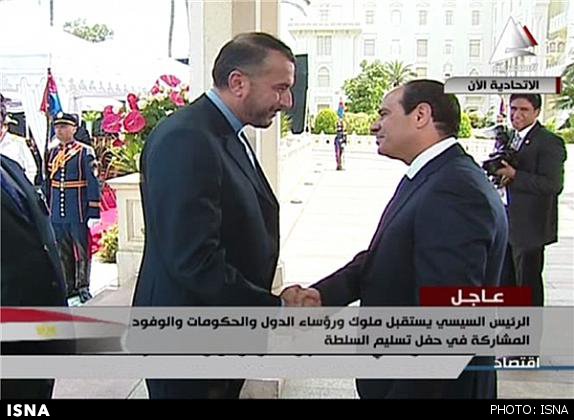 During the meeting held on the sidelines of the African Union summit in Addis Ababa, Ethiopia, Amir-Abdollahian and el-Sissi also emphasized Iran-Egypt shared stance on fighting terrorism in the region, specially in Iraq and Syria.

The Iranian diplomat condemned the recent terrorist attack in Sinai Peninsula, Egypt, and called for participation of all political groups and national unity in Egyptian political process.

He also stressed significance of unity in the Islamic World, and confronting Takfiri moves across the region.

Egyptian security officials said at least 44 people were killed and over 80 others injured after militants carried out attacks on army and police targets as well as an office of a daily newspaper in the strife-stricken Sinai Peninsula on Thursday.

The officials, speaking on condition of anonymity, said a massive car bomb detonated outside the headquarters of the 101st Brigade of the Egyptian army in the city of el-Arish, situated 344 kilometers (214 miles) northeast of the capital, Cairo, late on Thursday, leaving scores of people killed and wounded.

Separately, an office of Egypt’s most-widely-circulated daily, al-Ahram, was “completely destroyed” in an assault by gunmen.

Two Egyptian army officers were also injured when an army convoy was targeted with mortar shells in the border town of Rafah.

Over an hour later, there were reports of another ambush on an army convoy just south of Rafah. Gunmen also reportedly attacked a checkpoint in Rafah.

The Egyptian military considers the Sinai Peninsula a safe haven for gunmen who use the region as a base for their “acts of terror.

By ISNA
The Iran Project is not responsible for the content of quoted articles.