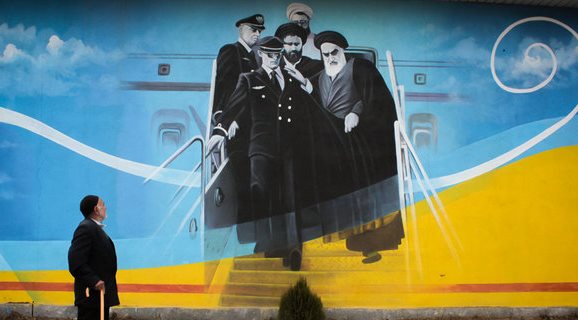 On 1st February 1979 Ayatollah Khomeini returned to Iran after fifteen years in exile, and set about establishing the country as the world’s first Islamic Republic.

Ruhollah Khomeini was born in the first few years of the twentieth century, in Kohmeyn, central Iran. His father was an Islamic religious scholar, and from an early age Khomeini started to study the Qu’ran. Khomeini was from a family of Shiite Muslims, the branch of Islam practiced by the majority of Iranians, and at an early age devoted his life to the formal study of Islam.

As Khomeini gradually rose through the Shiite hierarchy in the 1920s and 1930s he became an increasingly popular figure among Iranians. As a scholar he produced an abundance of influential writings on Islamic ethics, law and philosophy. The key to his popularity however, came from his political activities. He was an outspoken opponent of Iran’s leader Mohammad Reza Shah Pahlavi, who had been controversially installed by British and Soviet troops in 1941, and a vocal advocate of preserving Islamic purity from Western influences. In the early 1960s he received the title of grand ayatollah, making him one of the most important leaders in Iran’s Shiite community.

Shah Pahlavi retained the support of the West, and in particular the US and Britain, who in the early 1950s helped him defeat a popular political rival. In 1963 the Shah launched the ‘White Revolution’, essentially an attempt at secularising Iranian society, that involved reducing the size and influence of the religious estates in favour of modern reforms such as land distribution and equal rights for women.

Khomeini was an outspoken critic of the White Revolution, and his arrest in 1963 triggered a series of anti-government riots, revealing the threatening level of popularity he enjoyed. In November 1964 he was exiled from Iran, and forced to settle in the Shiite city of Al-Najaf in Iraq, close to the Iranian border. From Al-Najaf he distributed ‘home recordings’ of his sermons to his supporters in Iran, continuing to call for an end to the Shah’s program of Westernisation.

Throughout the sixties and seventies the Shah’s regime became increasingly repressive, and discontent grew. In 1978 demonstrations broke out in Iran’s major cities. Anti-Shah forces had previously been the domain of the radical student followers of Khomeini – ultimately just a small section of society. By the time of the demonstrations of 1978 however, a much broader cross section of society had joined the protest movement. In December the Iranian army mutinied, leaving the Shah with no means to suppress the protests. In January 1979 he fled the country.

Khomeini returned to Iran triumphantly, and swiftly set about transforming the country into an Islamic state. Buoyed by enormous popular support, a new constitution created in December installed him as Iran’s political and religious leader for life. Under his rule traditional Islamic law was returned to Iran, women were forced to wear the veil, and Western culture was completely banned.

By the time Khomeini passed away in June 1989, Iran had become defined by Islamic law. His reign had witnessed the controversy of the US Embassy crisis, when US citizens had been taken hostage for over a year by Iranian students, and a brutal eight year war with Iraq which had up to a million casualties.

The Islamic revolutionary fervour started by Khomeini could not outlive its creator, however. Within a few years of his death a process of gradual democraticisation started in Iran, culminating in democratic elections in 1997.