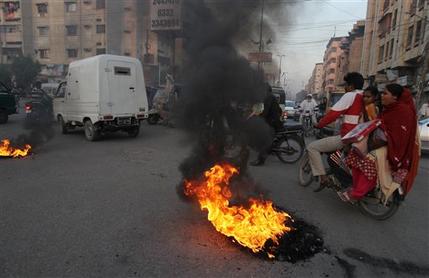 Pakistani protesters burn tires to condemn a blast at a Shiite mosque, Friday, Jan. 30, 2015 in Karachi, Pakistan. The bomb ripped through a mosque in Pakistan belonging to members of the Shiite minority sect of Islam just as worshippers were gathering for Friday prayers, killing dozens of people and wounding many others, officials said. (AP Photo/Fareed Khan)

ISLAMABAD (AP) — Thousands of Shiites across Pakistan mourned and protested Saturday after a bombing at a Shiite mosque in the country killed at least 59 people.

In Shikarpur, the site of the blast, mourners held a mass funeral for the dead in Friday’s attack. Thousands of Shite mourners beating their chests and heads, wailing as other non-Shiites also took part.

The bombing happened in Shikarpur, roughly 500 kilometers (310 miles) north of Pakistan’s port city of Karachi. That area of Pakistan has suffered comparatively little violence in contrast to the northwestern tribal areas bordering Afghanistan. Friday’s bloodshed raised fears that extremists could be gaining a foothold in the region.

The blast took place when about 250 worshippers gathered in the Shiite mosque for Friday prayers, Kalwar said. Dozens were wounded.

U.N. Secretary-General Ban Ki-moon was “appalled by such vicious targeting of people on account of their religious affiliation,” his spokesman said in a statement.

Many Sunni extremists do not consider Shiites, who represent as much as 20 percent of Pakistan’s population, to be true Muslims. Sunni militants in Pakistan have bombed Shiite mosques, killed Shiite pilgrims traveling to neighboring Iran and assassinated Shiite religious figures and community leaders.

By The Associated Press
The Iran Project is not responsible for the content of quoted articles.