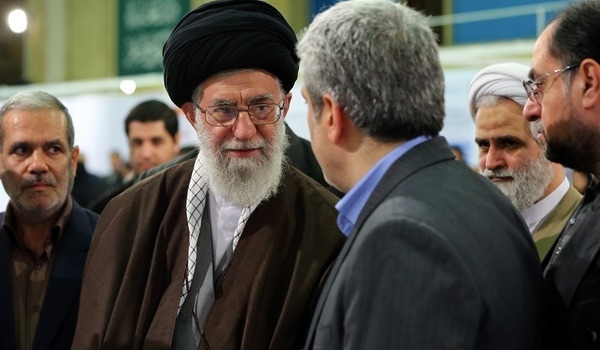 TEHRAN (FNA)- Supreme Leader of the Islamic Revolution Ayatollah Seyed Ali Khamenei described Iran’s independence as the main cause of the bullying powers’ hostility towards the country, adding that Iran needs to speed up scientific progress in various fields.

Ayatollah Khamenei made the remarks, addressing the Iranian nanotechnology and biotechnology university professors, researchers and managers in Tehran on Saturday.

The nation’s political, social and intellectual independence is the cause of the enmity of the bullying powers towards the Iranian nation, the Supreme Leader said, adding, “This hostility shows itself in different arenas and therefore, we should make ourselves more powerful to develop the necessary might.”

He further laid much emphasis on protecting the elements which are seen as contributors to progress, saying this is needed for continued and sustainable progress.

The Leader said precise planning, stability in management and creating culture, discourse and literature are much needed for preserving the current pace of progress in nanotechnology.

He said another major contributor to continued progress is separation of politics from science. “…you shouldn’t allow political motives to influence scientific and research atmospheres”.

He advises the Iranian researchers not to become extremely proud of their progress and not to be satisfied with the status quo, and said although Iran’s scientific progress enjoys a higher speed compared with other states and the country ranks 7th in the world in the field of nanotechnology, more efforts should be made to further accelerate the growth of science and technology.

Ayatollah Khamenei also underlined the necessity for commercializing nanotechnology products and achievements and financial profitability, and said, “One of the important factors for guaranteeing progress in the nanotechnology industry is that people should see the impact of your scientific and research works in their living environment.”

Secretary-General of Iran Nanotechnology Initiative Council (INIC) Saeed Sarkar announced in 2013 that Iran had achieved eye-catching breakthroughs in the field of nanotechnology science and technology, adding that the country ranked 1st in nanotechnology in the region.

He added that production of nanoscience has taken an increasing trend as the country has advanced 50 levels during 2000-2012 period.

Sarkar announced in 2012 that Iranian experts and scientists were able to produce 38 nanotechnology laboratory tools and equipment.

Stressing Iran’s huge growth in nanotechnology, he predicted that the country would soon witness a new wave of progress in the field of nanotechnology.

Sarkar also said that different Iranian industries, including the country’s auto-manufacturing companies, are making an increasing use of nanotechnology in their products.

“Nanotechnology has been employed in 8 Iranian industries, including the car-manufacturing industry,” he told FNA.

The nanotechnology growth indicators for Iran have marked a high rise during the recent years as in the total number of the scientific publications, the country has just jumped up two ranks (at the beginning of 2012) to stand 10th in the world. Iran ranked 14th, in the same list, at the beginning of 2011.