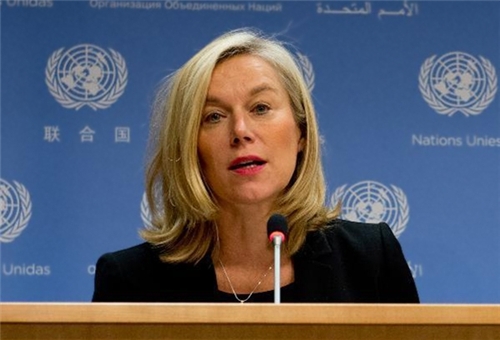 TEHRAN (Tasnim) – The United Nations Special Coordinator of the Secretary General for Lebanon Sigrid Kaag called on Iran to contribute to restoration of peace to Lebanon after an Israeli airstrike on a Hezbollah convoy sparked the Lebanese movement’s retaliatory attack.

The UN official made the demand in a telephone conversation with Iranian Deputy Foreign Minister for African and Middle East Affairs Hossein Amir Abdollahian, on Thursday.

Hezbollah said the offensive was a retaliation for a recent Israeli strike on the Golan Heights in Syria’s strategic region of Quneitra.

On January 18, a Zionist military helicopter gunship fired two missiles into Amal Farms in Quneitra region. Six Hezbollah fighters and an Iranian general of the Islamic Revolution Guards Corps were killed in the Israeli strike.

In the telephone conversation with UN’s Kaag, the Iranian deputy foreign minister said Hezbollah has taken military action on the basis of “legitimate right of self-defense.”

Amir Abdollahian also deplored the UN muted response to the “blatant” acts of aggression by Israel, which he said sparked the violence.

He then underscored Iran’s support for stability and calm in Lebanon, and condemned the Tel Aviv regime’s assaults which led to death of a Spanish UN peacekeeper in southern Lebanon.