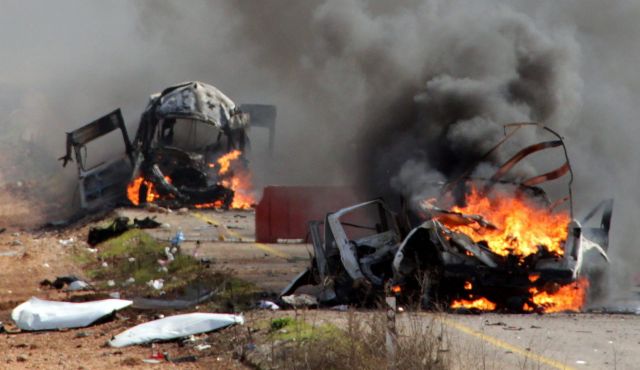 Israelis are paying the price  of a showcase operation

Israeli military vehicles are burning on the Israeli-Lebanese border, near the village of Ghajar, following a Hezbollah missile attack, January 28, 2015. Photo by AFP

Israelis should ask themselves whether the Syria strike justified the loss of the soldiers killed in the retaliatory attack, or the new hostilities with Hezbollah and Iran.

Wednesday’s incident on Har Dov, in which two soldiers were killed and seven were wounded when an antitank missile was fired on an Israel Defense Forces vehicle, was a predictable response to the January 18 operation in Syria, attributed to Israel, in which six Hezbollah operatives, including Jihad Mughniyeh, whose father Imad Mughniyeh was assassinated in 2008, and an Iranian general were killed.

Given the fears of escalation and the opening of another front in the north, there is an increasing sense that the operation attributed to Israel was an operational and a strategic error. It also raises questions about the judgment of the decision-makers – the prime minister, the defense minister and the chief of staff.

No Israeli should avoid asking whether the operation attributed to Israel was necessary and contributed to the security of its population; whether it justified the loss of the soldiers who were killed in the retaliatory attack and whether it justifies the new account opened with Hezbollah and Iran in its wake as well as the risk of regional escalation.

Obviously it cannot be determined whether there was a direct link between last week’s operation in southern Syria and the election campaign of Prime Minister Benjamin Netanyahu, who is declining in the polls. But Maj. Gen. (res.) Yoav Galant, a Knesset candidate for the Kulanu party, revealed that although in the course of his own service as GOC Southern Command there had been numerous opportunities to assassinate Hamas military chief Ahmed Jabari, whose killing in November 2012 — nine weeks before the last general election — precipitated Operation Pillar of Defense in the Gaza Strip. “For some reason it didn’t happen on those [other] dates,” Galant said. “Based on past incidents, one can deduce that sometimes the timing isn’t entirely unconnected to the election.”

When Foreign Minister Avigdor Lieberman, whose party is being investigated for alleged corruption, hastens to declare that Israel should respond in a “forceful and disproportionate manner” to the events, it’s hard not to wonder whether his calls to war stem from an interest in diverting the public’s attention from his party.

Such calls must not be allowed to affect military or political decision and lead Israel into disaster. The prime minister, even in the midst of an election campaign, must first protect the security of Israeli civilians and soldiers and avoid provocations that could exacerbate the tensions.