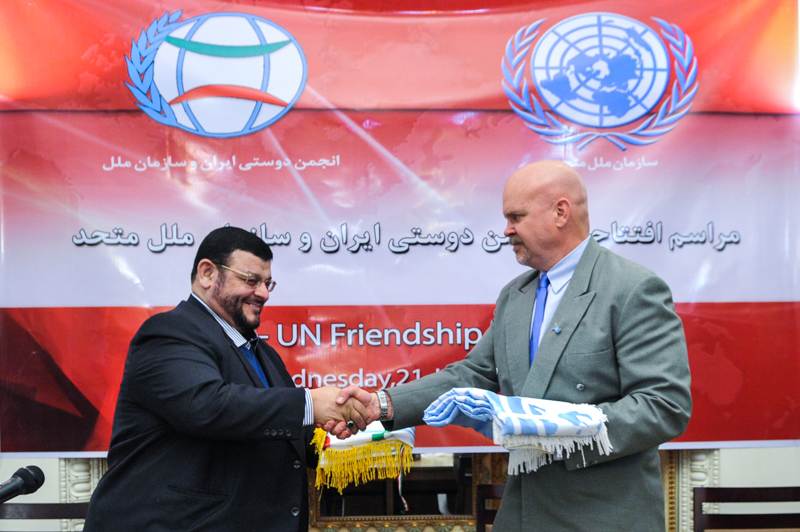 “It is far better than speaking the same language, that we take the time to fully understand one another.” (Rumi)

UN Resident Coordinator in Iran, Mr. Gary Lewis, quoted the Persian poet, Rumi, in evoking the concept of how to build partnerships at the inauguration of the Iran-UN Friendship Association (IUNFA) in Tehran on Wednesday 21 January.

The Iran-UN Friendship Association was recently formed to help raise awareness about the work of the United Nations among the citizens of Iran and to promote visibility of their joint achievements on development and humanitarian cooperation.

In opening the ceremony, Deputy Foreign Minister Rahimpour referred to Iran’s role in safeguarding peace. Dr. Rahimpour discussed the current crucial nature of President Rouhani’s initiative for a World Against Violence and Extremism – or WAVE– as it is more commonly known.

Chairman of the IUNFA, Dr. Seyed Hossein Moussavi, spoke about the significance of this new association in showcasing Iran’s close partnership with the United Nations. He also expressed optimism that the IUNFA can make use of the country’s capacities in controlling violence and extremism in the region.

Mr. Lewis, in his address, expressed delight in participating in this inauguration and made a vital connection between the Iran-UN Friendship Association and the UN’s MDG Number 8 – partnerships.

“Partnerships,” Mr. Lewis said, “become all the more important in this year 2015, which marks the 70th anniversary of the founding of the United Nations and the adoption of the UN Charter, which safeguards the four priorities of peace, human rights, justice an development.”

“Iran is a respected founder member of the UN,” he continued, “and thus also marks its own 70th anniversary of membership in our organization.”

The Resident Coordinator spoke about the mega-challenges facing the United Nations and all people across the planet. He pointed to the current crises such as climate change, water shortages, desertification, pollution, deadly contagious diseases, inequality, conflict and violent extremism.

Mr. Lewis concluded his remarks by stating that – in the spirit of mutual cooperation – he hoped that the IUNFA association will contribute towards further humanitarianism and development in Iran.

Also in attendance at the inauguration were ambassadors and representatives from Tehran’s foreign missions, members of academia and leaders of Iran’s friendship associations with other countries.

To read the full text of the statements made by the UN Resident Coordinator, please click here.

Click here to learn more about the key achievements by the UN in Iran in 2012-2013 in Farsi and English.