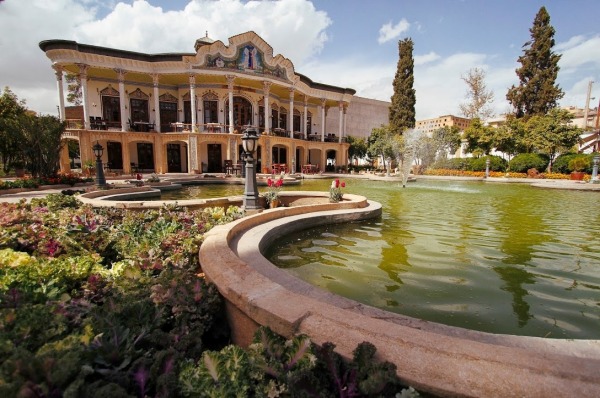 “Your country?” he asked, staring intently.

“New Zealand” I answered, carefully drawing out the vowels.

“Neeeew Zeeelaaaand” he repeated back at me, and cracked a toothy grin. “Very good. Iran – you like?”

I was at a dusty bus station outside the desert city of Yazd, and I was being watched. Not just by this old man vigorously shaking my hand, but by his friend, and his friend’s friend too. Even a baby, just a few months old, stared wide-eyed and slack-jawed as his hijab-clad mother bustled past.

By now my answer to his question was as polished as the rings on the old guy’s gnarly fingers. “Iran’s beautiful!” I told him. “People – very friendly!”

Satisfied, he released my hand and shared my reply in quick-fire Farsi with the inquisitive crowd. An old lady snorted, turned, and walked away. I must have said something wrong.

A street vendor’s rings, in Tehran.

Before I went to Iran, I’d read all the stories – nuclear weapons, human rights issues, inequality. It had an image problem, I got that.

But I’d heard another story too. A story of amazing food, culture and sights, served with hospitality as old as the Persian Empire herself. A people so generous they would warmly invite you into their home and once you’d been suitably fed, reveal in hushed tones what Iran was really, actually like.  I was determined to find it for myself.

But as I watched the old man climb on the bus and give me a cheery wave goodbye, I’d all but given up.

True, there had been plenty of shy smiles and I’d been passed the odd handful of pistachio nuts on late-night buses, but that was it. I was still no closer to understanding what it really meant to be Iranian, in Iran.

Early in my trip, in the beautiful but traffic-clogged city of Shiraz, I became lost in the winding alleys near the Arg-e Karim Khan, an imposing brick castle smack bang in the middle of a heaving intersection.

Inside the Nasir al-Mulk Mosque in Shiraz

Folding open my city map I was pounced upon by Musavi, an enthusiastic teenager who wasn’t going to let something like a language barrier get in the way of helping a tourist in need. Somehow he worked out where I should be going and pointed me on the right track.

I wandered on to the next intersection, then stopped. Between the three handshakes we’d just made and the promises to add him on Facebook, I’d completely forgotten his directions. Was it left or right?

Turning around, I spotted Musavi gesticulating wildly in the middle of the street, oblivious to the honking traffic tearing past.

“I love you!” he yelled, before blowing kisses in my direction and clutching at his heart. So he did know some English then.

A bus from Shiraz took me north across a dry windswept desert to Esfahan, perhaps Iran’s biggest tourist draw card. Famous for a bazaar so huge that if the shopkeepers didn’t get you, fatigue surely would. I spent two days exploring the breathtaking twin Mosques at Naghsh-e Jahan Square.

Visiting in the morning with only a few street-sweepers for company, the blue tiles of the Imam Mosque softly changed colour as the sun rose. In the evening, as the square filled with picnicking families, the tiles glowed gold under the city lights.

A view of the Immam Mosque in Esfahan.

As I bent my neck looking up into a particularly impressive dome, I felt a tap on my elbow. Turning around, a girl’s hijab-framed face stared expectantly at me.

Signing with a flourish, she ran off to her parents who snatched the piece of paper from her. I grinned as they stared in wonder at my scrawl like it was the signature of Mohammed himself.

The next day, fresh from exchanging email addresses with half of Esfahan’s English-speaking populace, I travelled to Tehran, Iran’s hectic capital.

Setting out to find the infamous US embassy, I stepped into a thriving bakery to ask for directions. Reza, one of the bakers, introduced himself and proceeded to reel off a well-worn sales pitch about it being the perfect balance of cardamom and almond that made his baklava Tehran’s finest.

He was clearly doing something right – by the time I left I’d bought four boxes of baklava, three cakes and two huge boxes of Gaz, a sweet nougat-like fudge.

But more importantly, I’d been invited to visit him and his family at their home that same evening. Surely this would be my chance to get the lowdown on Iran.

I donned my finest pair of traveller’s cargo pants and headed into the city.

Reza said the perfect balance of cardamom and almond made his baklava the best in Tehran.

Reza’s apartment was small but cozy, one of many in a featureless block. Despite being at home, his shy wife kept her hijab on as she quietly brought out bowls of honeyed dates, fresh grapes and biscuits.

She served endless sweet chai, and Reza gave me homebrew whisky which I was encouraged to drink quickly, followed by a bite on an orange to increase its effects.

Later, we sat watching Michael Jackson music videos on Reza’s TV. Like many things in Iran, foreign media is banned, or at least heavily censored. Earlier he had proudly shown me his satellite dish on the apartment roof – one of at least 10. All illegal, and yet somehow tolerated.

“What you hear about the secret police watching you is all lies,” he said, as I tried to politely remove orange pips from between my teeth.

“If you want to have internet, or foreign TV, it’s ok. If you want it, you can get it – the government doesn’t mind.”

“And if you want to leave Iran?” I asked.

“Not easy, but only because it is expensive.”

Earlier, Reza’s daughter Nazgul had come home from school and was seemingly unfazed by a stranger being in her house eating her dinner and guzzling her dad’s hooch.

She grilled me at length about university overseas and looked visibly disappointed when I wasn’t able to tell her much about engineering degrees in Canada.

“I want her to study overseas – but to come back here,” said Reza, after she’d gone to bed. “Most of the young people want to stay here I think.”

What is Iran really like? I still don’t know for sure. It sits trapped in time, with people who are fiercely keen to change the views of those who live outside.

The people are more welcoming than anywhere else I’ve been, and there is no sense of anger towards foreigners, only a mild embarrassment for the troubles in the past.  It’s a place few might see, but one they really should.