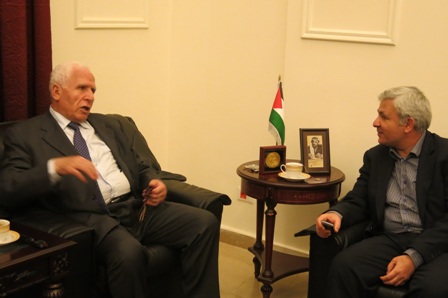 Beirut, Jan 27, IRNA – A senior member of the Fatah Central Committee has welcomed any progress in Iran’s nuclear talks with the West noting that a powerful Iran would be more in favor of Palestine.

Speaking in an exclusive interview with IRNA here, Azzam al-Ahmad made the remarks while commenting on what he said signs of progress in Iran’s nuclear talks with the Group 5+1.

Iran has the right to have what it aims, said the Fatah senior official noting the more Iran gains strength, the more it would be beneficial for the Palestine.

Al-Ahmad referred to Iran as a major Islamic state which has always been supporting Palestine considering it as a religious and humanitarian duty for Tehran.

Al-Ahmad who is a close friend of President of the Palestinian Authority Mahmoud Abbas (Abu Mazen), said Abbas is willing to visit Iran upon an official invitation by the Iranian authorities.

He is waiting to receive an official invitation from the Iranian authorities, Al-Ahmad stressed.

Touching upon the issue of Iran’ nuclear talks with the world big powers, he hoped that the negotiations would end in Iran’s favor.

Al-Ahmad also hailed vigilance of the Iranian negotiating team in the talks with the Group 5+1 describing them very smart.

He stressed that the Zionist regime is not happy with the progressing trend of the nuclear talks as Tel Aviv prefers to see the region in fire and tension in order to achieve its goals.

Israel aims to tarnish the situation in the region in order to safeguard victory of its Prime Minister Benjamin Natanyahu party in the next parliamentary election to be held by the Zionist regime in March.

He predicted that victory of Natanyahu will have negative effects on the process of Iran’s nuclear talks with the world sextet (US, Britain, Russia, France and China plus Germany).

Referring to Fatah stand on Syrian crisis, Al-Ahmad said those who seek annihilation of Syria are acting against the interests of both Syria and Palestine. This is the official position of Fatah Central Committee, stressed the official.

What is underway in Syria is not only related to that country but it is an issue involved by other regional and international parties, mostly the US that is openly meddling in the Syrian crisis, Al-Ahmad said.

He regretted that certain regional and Arab states were also acting in line with the Zionist regime regarding the issue of Syria by arming opponents of Syrian government.