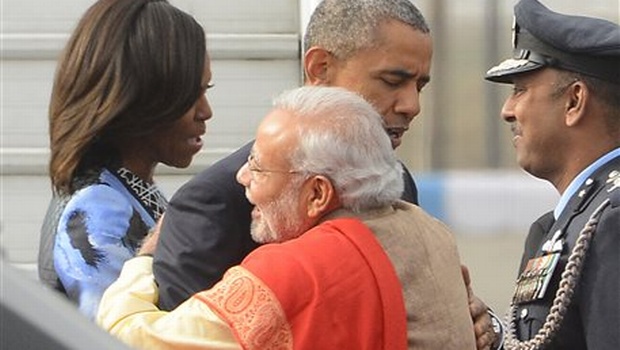 Nuclear deal could be a game-changer for US-India relations, but some question if Indians will ultimately pay the price.

Critics have expressed concern after US President Barack Obama announced a breakthrough agreement with India on civilian nuclear cooperation, saying little is known about the deal and it’s unclear whether compensation would be paid to victims of any nuclear disaster.

Detractors of the agreement also said national security could be jeopardised if American companies are given nuclear reactor inspection rights at Indian facilities, as demanded by the US.

India’s Communist Party of India (Marxist) protested Obama’s second visit to India on Saturday with about 100 demonstrators chanting: “Barack Obama, hands off India” with some burning the US president’s effigy.

The issue of compensation by foreign corporations after industrial accidents is particularly sensitive in India following the 1984 Bhopal disaster, in which thousands of Indians were killed and disabled after poisonous gas leaked from the American Union Carbide factory. Thirty years later, outstanding victim compensation claims remain.

Few specific details in the agreement have been released after the breakthrough was announced at a press conference with Indian Prime Minister Narendra Modi on Sunday. It’s unclear where India’s Nuclear Liability Act – which provides civil liability for nuclear damage and prompts compensation for victims of an incident – will be amended.

Jogendra Sharma is a senior member of the Communist Party of India that has long criticised a civilian nuclear deal with the US. He led some of the recent protests against Obama’s visit.

“Our main concern is that victims of nuclear accidents will not be fairly compensated if this deal goes through,” Sharma told Al Jazeera. “We want strict laws that will hold US companies accountable to pay compensation to the victims in the event of a nuclear accident.”

Obama arrived in New Delhi on Sunday for a three-day visit, shortened by the death of Saudi King Abdullah with the US president heading to Riyadh for the state funeral. On Monday, Obama attended India’s Republic Day celebrations, the first US president to do so.

Civilian nuclear talks began in 2005 between the US and India, but had been stalled over the issues of nuclear accident compensation and national security.

Uday Bhaskar, a director at India’s Society for Policy Studies think-tank, said the deal announced on Sunday is a game-changer for broader US-India relations.

“The impact of this Delhi breakthrough on the nuclear issue will re-energize and reset the moribund India-US bilateral relationship, and this will in all likelihood have a beneficial ripple effect on all the other issues that are awaiting traction during Obama’s visit,” said Bhaskar.

“It is unfortunate that after coming into power, the Bharatiya Janaty Party has changed its views over the liability act and is now giving in to the demands of imperialist America,” Sharma said.

BJP earlier proposed the creation of a compensation fund managed by insurance companies to pay potential victims in case of a nuclear incident. It remains unclear whether this is part of the deal announced by Obama and Modi on Sunday.

BJP spokesman GVL Narsimha Rao said the government had the best interests of the country in mind when securing the nuclear deal with the US.

Rao also brushed aside comments by the Communist party. “The claims by our critics on BJP’s slanting position towards America regarding the nuclear deal are all baseless,” he told Al Jazeera. “We are a nationalist party and our prime minister has the best interests of the Indian people in his mind while securing the deal.”

Rao declined to answer questions about the possible creation of an insurance fund to compensate victims of any nuclear accident. Modi was also vague on the fine details of the agreement when questioned at Sunday’s press conference.

“Let it be behind the curtain,” Modi told the news conference, a reference to the name of a popular Hindi song.

Obama said the implementation of the agreement cannot happen “overnight” and will take time to finalise.

The backlash against allowing foreign companies to operate in India goes back to the1984 Bhopal gas tragedy – one of the world’s worst industrial disasters. More than 500,000 people were exposed to poisonous gasses such as methyl isocyanate; nearly 4,000 people died, and about 3,000 were permanently disabled.

In 2010, when Obama visited India, he was met with protests organised by some survivors of the Bhopal tragedy, which for many needs to be resolved before US-India relations can move forward.

Rachna Dhingra, India coordinator for the International Campaign for Justice in Bhopal, said the Nuclear Liability Act clearly outlines compensation responsibilities of foreign suppliers in case of a nuclear catastrophe, and that fact should not be changed by the Obama-Modi announcement.

“The government of India is offering to absorb all risks by propping an insurance pool to cover suppliers’ liability,” she told Al Jazeera. “It is a matter of shame that the heads of two leading democracies have blatantly put corporate interests above public welfare.”