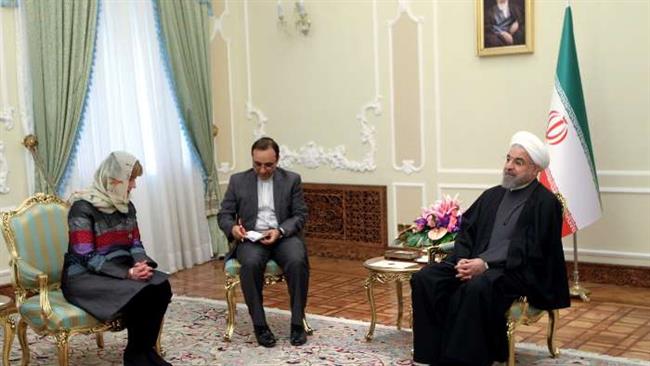 We are very close to nuclear agreement: Rouhani

Iranian president Hassan Rouhani says the country is “very close” to clinching a deal with global powers on its nuclear program.

At a Sunday meeting with visiting Croatian Foreign Minister Vesna Pusic, Rouhani said that Iran has been involved in satisfactory negotiations with P5+1.

“For the talks to yield results more quickly, political will is needed in the other side of negotiations with Iran,” Rouhani said.

Iran and the P5+1 countries — the US, France, the UK, China, Russia, and Germany – are trying to sign an agreement on Iran’s nuclear program by March 1 and finalize the technical details of the deal by July 1.

The two sides have already missed two deadlines to clinch such a deal after they signed an interim agreement in Geneva in November 2013.

Rouhani further reiterated that Iran is firmly standing on its nuclear rights while it also wants to ensure the international community about the peaceful nature of its nuclear activities.

The Iranian president said that current disputes between Iran and some western countries could be settled easily through logic and negotiation.

“The atmosphere currently dominating the world is not one of swordplay and the Islamic Republic of Iran wants to interact with others through logic and negotiation,” he said.

The Croatian foreign minister, for her part, expressed hope that the current negotiations between Iran and the world powers could result in a lasting agreement.

Pusic said that the necessity of reaching an agreement with Iran is doubled when one considers the increasing instability in the Middle East as a “stable Iran” would be the key to solving regional issues.

The top diplomat, who also serves as Croatia’s vice prime minister, also called for expansion of ties between Tehran and Zagreb, saying that Croatia looks for a new chapter in relations between the two countries.