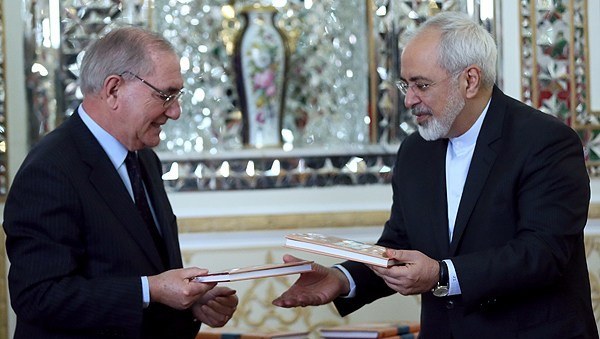 TEHRAN (FNA)- The Iranian foreign ministry unveiled a book titled ‘A Glance at the Glorious Empire of Pars’ on Monday.

The book was unveiled in a ceremony attended by Iranian Foreign Minister Mohammad Javad Zarif and his Portuguese counterpart Rui Machete at the premises of the Iranian foreign ministry in Tehran today.

Iranian Foreign Minister Mohammad Javad Zarif and his Portuguese counterpart Rui Machete
A Glance at the Glorious Empire of Pars is about the Persian Empire (550-330 BC). The Pars Empire ruled over significant portions of what would become Greater Iran. The Persian and the Median Empire taken together are also known as the Medo-Persian Empire, which encompassed the combined territories of several earlier empires.

The empire was established by Cyrus the Great, and spanned three continents: Asia, Africa and Europe. At its greatest extent, the empire included the territories of Iran, Afghanistan and Pakistan, parts of Central Asia, Asia Minor, Thrace and Macedonia, much of the Black Sea coastal regions, Iraq, Northern Saudi Arabia, Jordan, Palestine, Lebanon, Syria, and all significant population centers of ancient Egypt as far west as Libya.