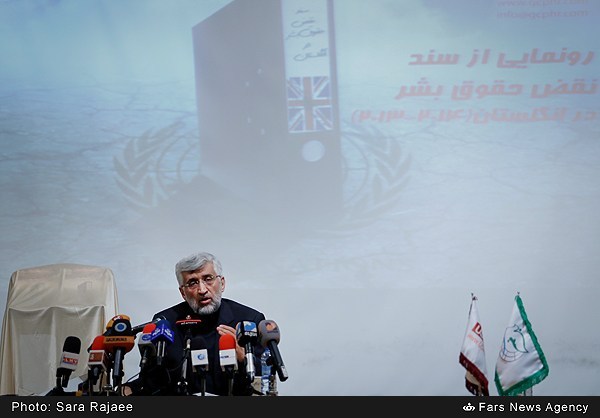 TEHRAN (FNA)- Former Secretary of Iran’s Supreme National Security Council (SNSC) Saeed Jalili stressed the importance of Ayatollah Khamenei’s Wednesday message to the western youth, saying that the Leader has tried to show the true Islamic civilization to the world.

“What I have realized from the message is that the Supreme Leader’s letter to the European and US youth and addressing them directly is in line with the Islamic Revolution’s civilization move,” Jalili, also Iran’s former chief nuclear negotiator, said, addressing a gathering in Tehran on Monday.

Noting that the Islamic Revolution’s civilization is based on truth, he said, “This letter is a highly valuable start for making the European and US youth aware of the Islamic civilization.”

“In this case, what Islam says will be understood through a direct move,” Jalili said.

Last Wednesday, Ayatollah Khamenei sent a highly important message to the European youth to stress that the Islam that the West is trying to portray is a forged concept and not the reality.

“I don’t address your politicians and statesmen either in this writing because I believe that they have consciously separated the route of politics from the path of righteousness and truth,” Ayatollah Khamenei said.

“I would like to talk to you about Islam, particularly the image that is presented to you as Islam. Many attempts have been made over the past two decades, almost since the disintegration of the Soviet Union, to place this great religion in the seat of a horrifying enemy. The provocation of a feeling of horror and hatred and its utilization has unfortunately a long record in the political history of the West,” the letter said.

“Here, I don’t want to deal with the different phobias with which the Western nations have thus far been indoctrinated. A cursory review of recent critical studies of history would bring home to you the fact that the Western governments’ insincere and hypocritical treatment of other nations and cultures has been censured in new historiographies,” he added.

On Saturday, Leader of the Hamburg Islamic Center Ayatollah Reza Ramezani underlined that the Muslim community in Europe had given a wide welcome to the Iranian Supreme Leader’s message to the European youth.

“Based on field information, your kind letter to the European and North American youth has received a massive welcome by the Muslims of the region,” Ramezani said in a letter to Ayatollah Khamenei.

He expressed the hope that the young European people could have a bright future by practicing the strategies and solutions proposed by Ayatollah Khamenei, and establish durable peace and security in the human society and restore the rights of the oppressed nations.

Ayatollah Ramezani underlined his and other Shiite scholars’ efforts to pay special attention to the contents of the letter to bring them into action.