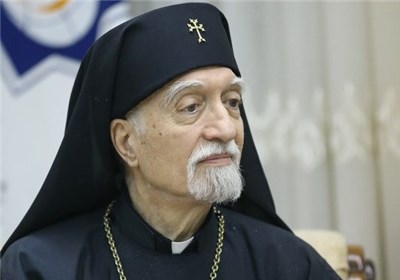 TEHRAN (Tasnim) – The patriarch of the Armenian Catholic Church censured France for the publication of sacrilegious cartoons of Islam’s Prophet Muhammad (PBUH), saying these moves indicate that the European country has strayed far from the principles of Christianity.

“The European countries do not live according to the principles of Christianity,” Nerses Bedros XIX Tarmouni said in a meeting with Head of the Islamic Culture and Relations Organization (ICRO) Abouzar Ebrahimi Torkaman on Saturday.

He made the remarks in a reference to recent sacrilegious cartoons published by the French weekly, Charlie Hebdo, depicting Prophet Muhammad (PBUH).

The Armenian patriarch went on to say that sometime in the past, France was one of the countries with deep-rooted Christian faith, but the desecration of the Prophet Muhammad has showed that today the country has moved far away from the principles of Christianity.

The Iranian official, for his part, said interfaith dialogue can result in mutual understanding among faiths, and the dialogue can also play a major role in decreasing the existing violence and extremism in the world.

He also described relations between ICRO’s Center for Interfaith Dialogue and the Catholic Church as “close”, and said the two sides are in constant interaction with each other.