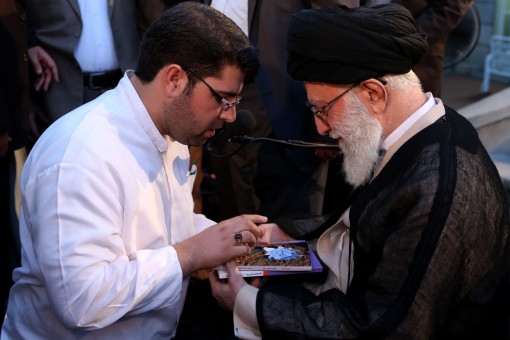 Let the young hear and know

(By Daniel  Mabsout for SayyidAli.com) — A very interesting inspiring letter from Imam Khamina’i to the youths of Europe and North America that should be spread and read. A letter filled with proper understanding of the condition of this youth that should have been addressed long ago, and that attempts at breaking through the alienation and marginalization the young people have been subject to and restoring them to a position where they become effective and actual conscientious builders of the future. The spiritual leader of Iran is addressing directly the youth across the imaginary geographical and political and religious separations.

It is but natural that Iran- through its spiritual leader and actual commander- addresses youth or people in general . This is due to the fact that the Iranian so called revolution or the Iranian approach and understanding , are meant for people, and address primarily all people from all religions and cultures and not politicians or rulers. Iran is not just ” nationally” or “materially” oriented nor does it seek its own salvation or its own prosperity at the exclusion of others. And it so happened that Iran is not caught in the material aspect of things seeking material welfare at the expense of the mental and spiritual welfare. Iran’s concern is for a better life for all people, a healthier mental and spiritual life of which none is excluded. An approach that concerns the future of humanity.There is no doubt that young people are being mislead by the present World Order , they are the scape goats and the category most targeted and this because they are the category that could start any change. What are the youth of Europe or of North America getting in terms of real knowledge that could shape their future understanding of things and life and take it in the right direction? They are getting nothing , they are turned into consumers of ready made products and ready made ideas and are being fed by the system the notions of the system that serve the ambitions and greed of the masters of this world.The only thing the Imam is asking from the youth is to think and seek and inquire about what they are being exposed to. He wants from them not to take things at face value but to exert the right effort in order to learn the truth about things , to rely on their capacity as independent individuals and not be manipulated into adopting wrong notions that will harm them and harm others and lead them astray from the right path . This is what Imam is asking and this what the youth needs.Young people are suffering everywhere because they are being deprived – by the system – of this capacity to think properly and ponder and discriminate over vital matters that concern them and their society and the world they live in. They are bombarded from all sides by everything one can think of and subject to all kinds of temptations and are made to serve the corrupt systems they live in instead of fulfilling their own aspirations and that of their societies and of humanity in general. To rebuild one’s personality and retrieve one’s identity – as a human being- is what is required and not to fall for fake propaganda and notions and ideals.Let the young people start build their personality and understanding and listen to their inner call as a starting point. Let them think for themselves, not only regarding Islam but regarding all matters and come up with their own conclusion built on their own experience and knowledge. Let them restore their confidence in their inner selves. This is the healing remedy youths everywhere are asking for and this is the healing remedy this world needs to take and this is being handed to them in this letter by the wise leader of Iran.