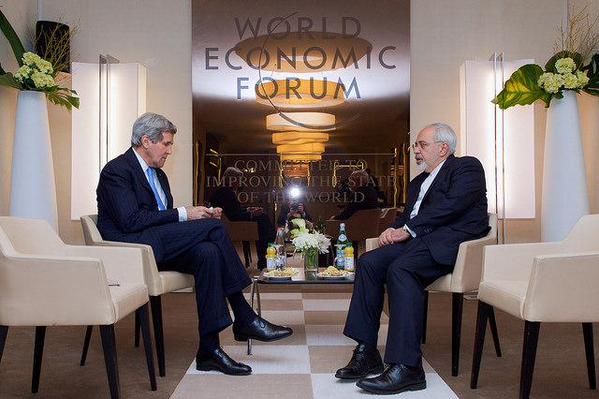 Iran’s FM Zarif meets US counterpart John Kerry on the sidelines of he World Economic Forum in the Swiss mountain resort of Davos.

There was no immediate word on whether the two men had made progress in the hour-long session on a deal to curb Iran’s nuclear work in return for an unraveling of Western economic sanctions on Tehran.

Having missed a November accord for a deadline, the two sides are now looking to reach a framework agreement in March and a final long-term deal by June 30.

Kerry and Zarif met as recently as last week, both in Geneva and in Paris.

Meanwhile, Zarif, speaking on a panel at the World Economic Forum in Davos, warned that more sanctions by the U.S. Congress would kill the negotiating process between Iran and major powers on its nuclear program.

Some lawmakers in both major U.S. political parties have backed fresh sanctions against Tehran, something U.S. President Barack Obama says he opposes while negotiations are continuing.

“A sanctions bill by the U.S. Congress will kill the joint plan of action,” an interim agreement adopted in November 2013, Zarif said. “The president of the United States has the power to veto it, but our parliament will have its counter-action and our president doesn’t have the power to veto it.”