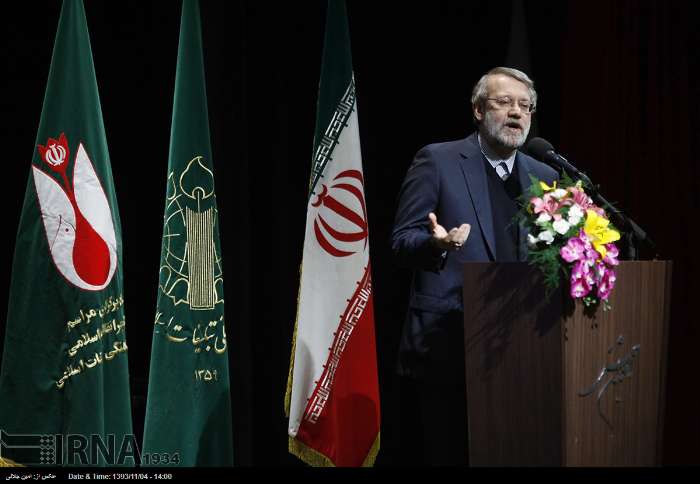 TEHRAN, Jan. 24 (MNA) – Iran’s Parliament speaker has said Iran’s nuclear issue is not a game but proof that the Islamic Republic is capable of standing up against hegemony.

Ali Larijani made the remarks at the national congress of Islamic Revolution Fajr Decade councils on Saturday.

He made references to the US Congress collision with the Obama Adminstartion in regards to nuclear negotiations and said, “what goes on within the US domestic politics is not our business. Should Obama fail to properly address the conflicts, he will be responsible for disrupting the course of negotiations.”

Larijani also stressed that the nuclear issue was proof that the Islamic Republic of Iran was fully capable of resisting hegemony, adding, “the nuclear issue is no game; it is one of the instances of defying western power and arrogance.”

Iran’s latest nuclear talks occurred on Friday on the sidelines of the World Economic Forum in the Swiss city of Davos, between Iran’s Foreign Minister Mohammed Javad Zarif and US Secretary of State John Kerry; another Friday meeting between Iranian deputy foreign ministers and the US negotiating team headed by Under Secretary of State for Political Affairs Wendy Sherman took place in Zurich.

Having missed a November accord for a deadline, the two sides are now looking to reach a framework agreement in March and a final long-term deal by June 30.