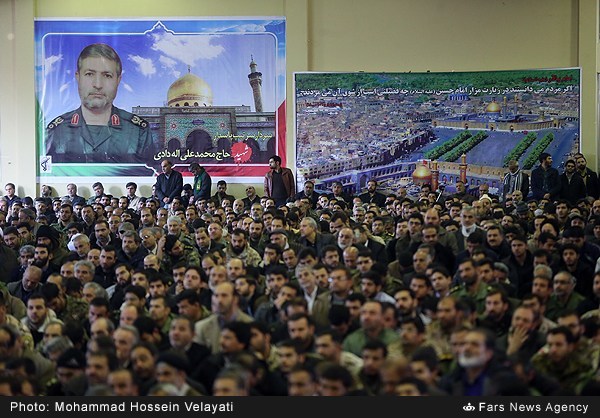 Allah-Dadi, who had a distinguished career and solid Iran-Iraq War background, was killed by an Israeli helicopter assault in the Syrian city of Quneitra, in the Golan Heights. The strike also killed six members of Hezbollah.

Senior Iranian officials have and are continuing to weigh in on the event, brandishing Iranian deterrence and even threatening retaliation against Israel in their statements. The broad amount of commentary and deep retaliatory sentiment in honor of Allah-Dadi stands in contrast to the somewhat more muted coverage of the recent (Jan. 10, 2015) funeral service of Hossein Ahmadi, another Qods Force officer “martyred” in Syria. Clearly, the killing of Allah-Dadi struck a chord.

The Secretary of Iran’s Supreme National Security Council (SNSC), Admiral Ali Shamkhani, claimed that “the current of resistance would answer the terrorist action of the Zionist regime with revolutionary intensity and determination in a time and place of our choosing.” Such open-ended threats were not limited to Shamkhani. In a prepared statement, Major General Mohammad-Ali Aziz-Jafari, the Commander of Iran’s IRGC proclaimed that “These martyrdoms have proved that we must not distance ourselves from Jihad; the Zionists must await our destructive thunderbolts, in the past they have seen the emergence of our anger.”

Brigadier General Esmail Qaani, the Deputy Qods Force Commander echoed Shamkhani’s sentiments, adding a twist of his own against Israel: “We will certainly provide the answer to your brashness and thuggery in our own time and place, and know that we will be [the] file against your spirit and life.”

Even former President Ali-Akbar Hashemi Rafsanjani, the current Chairman of the Expediency Discernment Council, used similar language, as he proclaimed, “To quote the Secretary-General of Lebanon’s Hezbollah, the Zionists [should] go prepare their refuge.”

Framing the strike as part of an attempt to blunt Iran’s regional preeminence was Brigadier General Hossein Salami, the IRGC Deputy Commander who stated, “The Zionists engaged in such a crime due to the defeats they have suffered from Hezbollah in Yemen, Bahrain, Iraq, and Syria.” Salami too issued a warning: “The Zionists should know that they will see the ruinous thunderbolts of the IRGC in action, as in the past.”

Praising Allah-Dadi more specifically, and linking his legacy to Iran’s Islamic Revolution was Major General Mostafa Izadi, a Deputy in Iran’s General Staff Armed Forces, who eulogized that “The martyr [Shahid] Allah-Dadi was the type of person who really knew himself, and found this luck to be present in different stages of the Revolution.”

Additionally weighing-in was Hojjat al-Eslam Mohammad-Hassan Abutorabi Fard, the Deputy-Speaker of Iran’s Parliament. Implying that Hezbollah would be in charge of the response, he noted: “Until present, the Zionists have received several slaps from the Islamic Resistance and Hezbollah, and the response of Hezbollah to this Zionist crime will be exceptional and special.”

Parliamentary Speaker Ali Larijani on the other hand, chose to praise Allah-Dadi’s “martyrdom” without linking it to a threat against Israel. The same went for Yazd Governor Seyyed Mohammad Mir Mohammadi, in charge of the city housing the Al-Ghadir IRGC unit which Allah-Dadi formerly commanded. Mir Mohammadi stated: “Martyrdom is the art of men of God.”

Iranian cabinet ministers too, have offered their condolences. Foreign Minister Mohammad-Javad Zarif called the attack an “insane act,” while Intelligence Minister Hojjat al-Eslam Alavi stated that Allah-Dadi was killed while engaged in “an advisory function to help the innocent government and nation of Syria against Takfiri-Salafi terrorists.”

And of course, the set of condolences included those of Hossein Dehqan, Iran’s Minister of Defense. Dehqan’s history of support to Hezbollah is well-known, as evidenced by his recent reference to Israeli activity in Quneitra circa 1982. Dehqan stated that “This terrorist action of the Zionist regime in the Golan [Heights] is the continuation of the crimes of the regime in Palestine, Syria, Iraq, [and] Lebanon.”

Recently, pictures have emerged from the ceremonies and funeral service of Mohammad-Ali Mohammadi. One notable photo is of current and former IRGC Commanders (skipping over Yahya-Rahim Safavi) Rezaie and Jafari. At the service, Major General Jafari took his praise of Allahdadi in a different direction than his earlier prepared commentary. While it is expected for the Islamic Republic’s elite to praise their deceased colleague and continue their vitriol against Israel, Jafari morphed Allah-Dadi’s death abroad into part of the foreign policy legacy of the Islamic Republic: “The Islamic Revolution outside the country’s borders is advancing with speed and is after the conquest of fortifications, and is the realization of the ideals of the deceased Imam (Ayatollah Khomeini) and the martyrs.”

Recent developments in the Middle East only underscore this point for Iranian elites, and perhaps more so for the scores abroad, like Allah-Dadi, who serve[d] under them.

By The Long War Journal