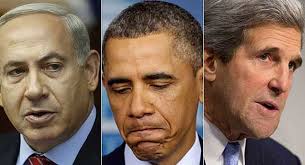 WASHINGTON — New US sanctions on Iran would potentially act as a “grenade” that could lead to the collapse of the current negotiations between Iran and the six world powers for a nuclear deal that Israel considers weak, the head of Israel’s intelligence service said in an unusual statement Jan. 22.

The rare public statement by Mossad chief Tamir Pardo was released by the Israeli prime minister’s office Jan. 22. This comes amid a new eruption of high-level tensions between Washington and Jerusalem over a potential Iran nuclear deal, and what Washington sees as Israel’s heavy-handed efforts to lobby Congress to pass new sanctions that the Obama administration believes would undermine prospects for reaching a diplomatic resolution.

The latest tensions broke to the surface after the White House said Jan. 21 it had not been consulted about the invitation from House Speaker John Boehner (R-Ohio) to Israeli Prime Minister Benjamin Netanyahu to address both houses of Congress about the Iran threat next month, and considered it a breach of protocol.

On Jan. 22, Boehner said Netanyahu had asked to move his address to Congress to March 3, when he will already be in Washington to attend the annual American Israel Public Affairs Committee (AIPAC) policy conference.