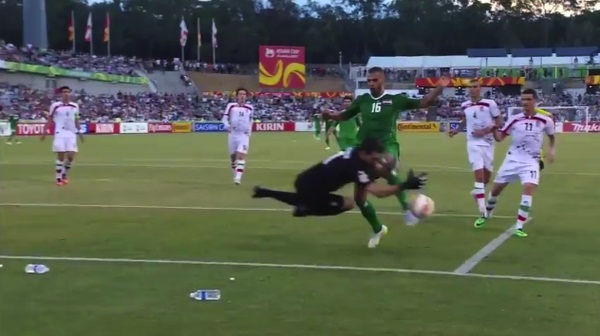 Iraq knocked heavyweights Iran out of the Asian Cup in the most dramatic fashion on Friday, beating their neighbours 7-6 in a penalty shootout after the teams drew 3-3 through extra time.

There were two goals in the first 90 minutes, four more in extra time, 13 successful penalties and three missed kicks as Iraq – the 2007 champions – secured a semi-final spot against South Korea.

With the shootout poised at 4-3, Iraq captain Younis Mahmoud kept his team in the match with a chipped “Panenka” penalty before Iranian substitute Vahid Amiry hit the post to leave Salam Shakir with the chance to win it.

He made no mistake, sending the Lions of Mesopotamia through.

It was tough on Iran, who played the whole of the second half and extra time with 10 men due to a contentious red card to defender Merhdad Pooladi.

Iran opened the scoring in the 23rd minute with a header from Sardar Azmoun – the “Iranian Messi”.

Pooladi was handed a red card in the 43rd minute after seemingly stepping over the head of Iraq goalkeeper Jalal Hachim, who was going for a save.

The unimpressed Hachim shoved Pooladi to the ground and Australian referee Ben Williams gave Pooladi his second yellow card and sent him on his way.

Furious Iran coach Carlos Quieroz could be seen being held back by his substitutes from confronting Williams as he headed in at the half-time interval.

Iraq took advantage of Iran’s depleted side in the second half, dominating possession and sending in a series of dangerous shots.

They equalised in the 55th minute with a shot from Ahmed Yaseen Gheni past goalkeeper Ali Reza Haghighi.

Iran equalised when Morteza Pouraligani headed in a corner kick from Andranik Teymourian but Dhurgham Ismael restored Iraq’s lead with a penalty.

Iran spectacularly came from behind once again with a Reza Ghoochannejhad header that finally found the net after successive failed shots from his team-mates inside the six yard box.

But it was all for nothing and Iraq now play South Korea in Sydney on Monday.