Yemen, a key US ally in the fight against al-Qaeda in the region, has been beset by unrest for months

Various pan-Arab papers refer to a “coup” having taken place.

Al-Quds Al-Arabi notes that the battle waged by the Houthis against the Presidential Guard “marked the end of a great historical stage in the history of Yemen”. The Houthis are the “most powerful dynamic force at present”, it adds.

Dailies in Saudi Arabia, the Sunni-ruled kingdom that borders Yemen, are highly critical of the Houthis.

“Treachery hits Yemen”, declares a headline in Ukaz. “The Houthi strangles Yemen,” Al-Watan says. Writing in the pro-government Al-Riyadh, Ali Naji Al-Rawi warns that Yemen “is moving quickly on the path of failure or the Somali model”. 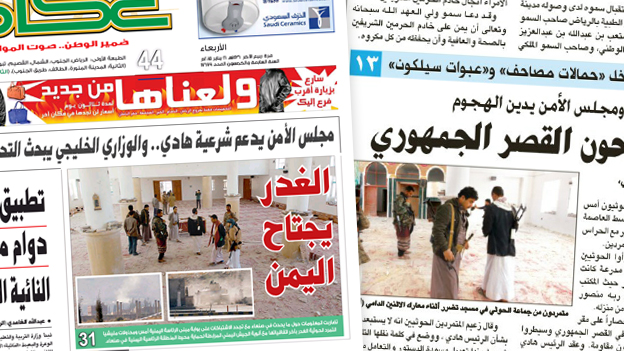 In Qatar, the pro-government daily Al-Rayah also strikes a cautionary note, saying: “The Houthis are risking Yemen’s future… via their armed actions and attempts to impose their control over the entire country under an illusionary pretext of protecting the revolution and fighting terrorism.”

However, Iran’s Arabic-language daily, Al-Vefagh, adopts a supportive tone, saying: “People’s committees control presidential palace in Yemen.” Iran’s government has been accused of providing financial and military assistance to the Houthis – something it has denied.

In Yemen itself, state-owned dailies continue to call for reconciliation and unity. “President: disagreements will be finally resolved according to agreements,” reads the main headline in Al-Thawrah.

Rasil Umar al-Qurashi in state-owned Al-Jumhuriyah agrees that “any element that thinks it can subject the country to its hegemony is mistaken… all political parties are responsible for the situation in Sanaa and Yemen in general”.

But pro-separatist Southern Movement (Hirak) papers see further justification for independence for the South in the light of current events.

“The current crisis clearly shows that the possibility of forming a civil state in Yemen has become impossible and that the only hope for that is in the South,” says Muhammad al-Saqqaf says in Aden al-Ghad. The Gulf Cooperation Council (GCC) and the UN have to take “a new initiative towards the South and its right to self-determination,” he adds.

Echoing those sentiments, Abdul Qawi Abdallah Baish says in Al-Tariq: “We now have the legitimacy of the revolution and we may have to resort to the fait accompli even if that costs us one million martyrs to liberate the Arab South and establish the state.”