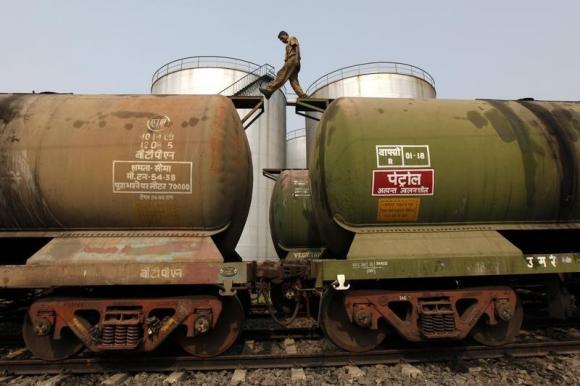 A worker walks atop a tanker wagon to check the freight level at an oil terminal on the outskirts of Kolkata November 27, 2013.
CREDIT: REUTERS/RUPAK DE CHOWDHURI/FILES

(Reuters) – India has asked its refiners to slash oil buys from Iran in the next two months to keep the imports in line with the previous fiscal year’s levels, sources with knowledge of the matter said, days ahead of President Barack Obama’s visit to New Delhi.

India has raised its crude shipments from Iran around 40 percent over the first nine months of the current fiscal year, when as part of the temporary deal that eased some sanctions on Tehran it was meant to hold them steady.

India and the United States will discuss the status of the Iran nuclear negotiations, Ben Rhodes, deputy national security advisor in the White House told reporters in a teleconference detailing Obama’s visit.

India’s higher imports from Iran would also be on the agenda, the two sources in India said.

“The refiners will have to virtually halt Iranian oil imports in February-March to retain purchases at last year’s levels,” said one of the sources with knowledge of the matter.

The sources did not want to be named because of the sensitivity of the issue.

India’s imports from Iran rose 41 percent to 250,200 bpd in April-December compared with the same period a year ago, according to tanker arrival data made available to Reuters.

Iran and six major world powers will meet next month to narrow differences over Tehran’s nuclear programme after making limited progress earlier in January to clinch a full blown deal by June 30 deadline.

MRPL and Essar declined to comment on any requests to cut purchases from Iran. IOC’s finance head did not respond to phone calls.