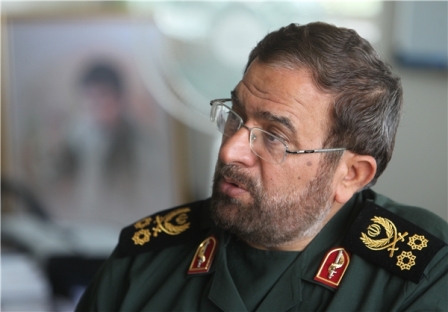 TEHRAN, Jan. 21 (MNA) – IRGC Deputy General Mostafa Izadi has said the people in the region will respond in kind to the recent Israeli airstrike killing 6 Hezbollah members along with a senior Iranian general.

Attending the funeral of Brig. Gen. Mohammad Ali Allahdadi assassinated by an Israeli airstrike during a mission in Syrian border region of Quneitra, Deputy Chief of Staff of the Iranian Armed Forces Major General Mostafa Izadi maintained that the efforts of Muslim soldiers in Lebanon which is the borderline between Israel and Syria, would back the realization of the lofty goals of Islamic Revolution and Islamic Ummah.

Noting that martyred Allahdadi was the first general to be killed by a direct Israeli missile, Major General Izadi stressed that the Islamic Revolution was a ‘revolution of values’ and this terrorist attack had only served to further mobilize the Palestinian, Lebanese and Syrian youth willing to sacrifice their lives to advance the goals of the Revolution.

“The Israelis had thought they would achieve great results by launching this attack, but fearing they would face severe consequences for their actions, they are now claiming to have been unaware of the presence of Gen. Allahdadi among the Hezbollah members,” he said.

“Iran’s retaliation would be to defend the resistance front, and the regional people themselves will also respond in kind to this attack,” he said.

Maj. Gen. Izadi also maintained that this terror attack had occurred in Syria which was in no direct conflict with Israel, and as such was completely ‘purposeful’.

“The ISIL attacks are in line with reinforcing the Zionist regime, which in turn reveals the nature of this terrorist group,” said Izadi, stressing that Iran’s countermeasure against ISIL was only in the form of consultative aid.

Israel carried out a Sunday’s airstrike on the Syrian side of the Golan Heights, which killed a prominent Hezbollah fighter, a senior Iranian general and five other Hezbollah members.