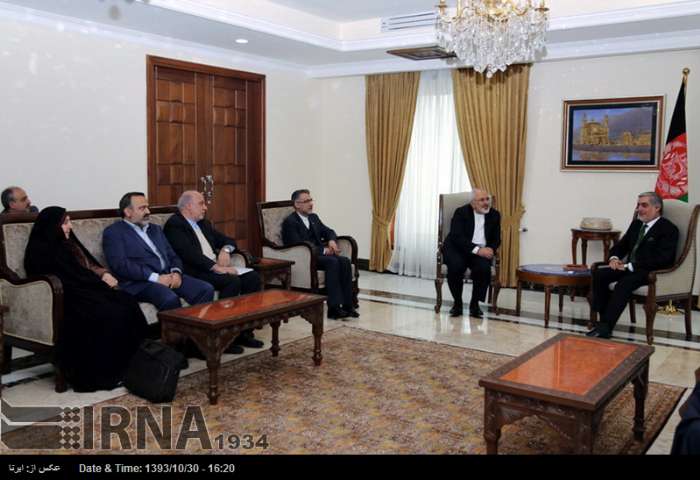 After meeting with Afghanistan’s Chief Executive Officer Abdullah Abdullah, Mohammad Javad Zarif told reporters that Iran has never interfered in Afghanistan’s internal affairs and would follow the same non-intervention policy in regard to this country.

“We have certain concerns over foreign presence in Afghanistan and have expressed these concerns in a friendly and clear way to neighboring countries, including Afghanistan itself,” said Zarif.

He referred to the two countries’ common challenges addressed during the joint meeting with Abdullah, noting that the issues discussed were on regional terrorism and extremism, as well as the sacrilegious and profane acts against sanctities which in turn fanned the fire of violence and extremism.

He mentioned immigration, economic discussions, water cooperation and drug trafficking as other challenges the two countries are facing.

Abdullah Abdullah, for his part, expressed his country’s deep gratitude for the Islamic Republic’s generous contributions, adding “Iran has stood by Afghanistan’s people and government under all circumstances and played a significant role in our country’s reconstruction, immigration and drug trafficking issue.”

Mohammad Javad Zarif heading an Iranian delegation had left Tehran for Kabul this Tuesday to hold meetings with Afghan President Ashraf Ghani and Chief Executive Officer of Afghanistan and Leader of the National Coalition of Afghanistan Abdullah Abdullah. He also extended President Rouhani’s official invitation to Ashraf Ghani for a visit to Iran.