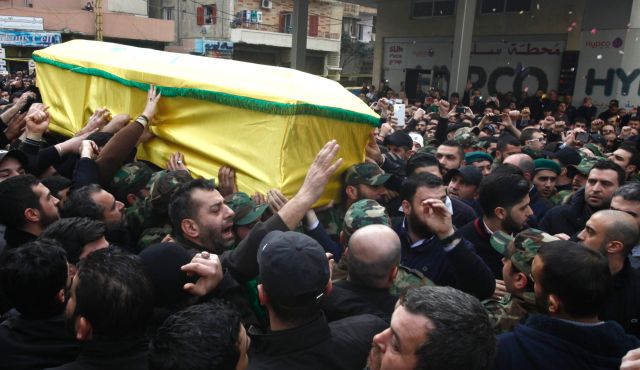 Source tells Reuters Israel believed only lower-level operatives would be present at the site of the strike.

An Iranian general killed in an Israeli air strike in Syria was not its intended target and Israel believed it was attacking only low-ranking guerrillas, a senior Israeli security source told Reuters on Tuesday.

The source declined to be identified because Israel will not confirm or deny whether it carried out the strike.

Iranian Revolutionary Guard General Mohammed Allahdadi was killed along with a Hezbollah commander and the son of the group’s late military leader, Imad Muughniyeh, in Sunday’s attack on a Hezbollah convoy near the Israeli-occupied Golan Heights.

Hezbollah, which is backed by Iran and fought a 34-day war with Israel in 2006, said six of its members died in the strike.

Tehran has vowed to strike back. “These martyrdoms proved the need to stick with jihad. The Zionists must await devastating thunderbolts,” Revolutionary Guards’ chief General Mohammad Ali Jafari was quoted on Tuesday as saying by Fars news agency.

“The Revolutionary Guards will fight to the end of the Zionist regime… We will not rest easy until this epitome of vice is totally deleted from the region’s geopolitics.”

Asked if Israel expected Iranian or Hezbollah retaliation for the air strike, the source said: “They are almost certain to respond. We are anticipating that, but I think it’s a fair assumption that a major escalation is not in the interest of either side.”

Troops and civilians in northern Israel are on heightened alert and Israel has reportedly deployed an Iron Dome rocket interceptor unit near the Syrian border.

“We did not expect the outcome in terms of the stature of those killed – certainly not the Iranian general,” the source said. “We thought we were hitting an enemy field unit that was on its way to carry out an attack on us at the frontier fence.”

“We got the alert, we spotted the vehicle, identified it was an enemy vehicle and took the shot. We saw this as a limited tactical operation.”

Israel has struck Syria several times since the start of the Syrian civil war, mostly destroying weaponry such as missiles that Israeli officials said were destined for Hezbollah, Israel’s longtime foe in neighbouring Lebanon.

Hezbollah has been fighting alongside President Bashar Assad’s forces in the four-year-old Syrian conflict.