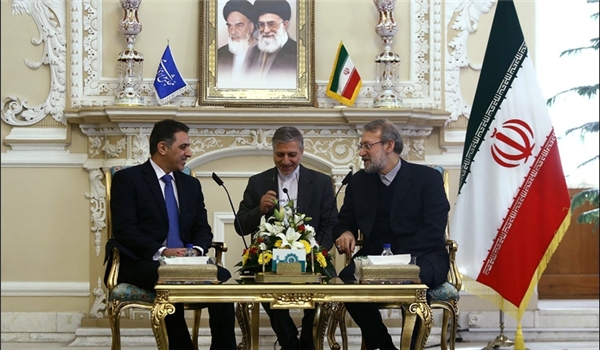 TEHRAN (FNA)- Iraqi Interior Minister Mohammed Salem al-Ghabban lauded the Iranian government and nation for their supports for his country, and said the Iraqi government and people will never forget Iran’s assistance to them.

“The Iraqi government and nation will never forget Iran’s financial and spiritual supports,” Ghabban said in a meeting with Iranian Parliament Speaker Ali Larijani in Tehran on Monday.

He reiterated that Iran’s cooperation in Iraq’s ongoing fight against the Takfiri terrorists was crucial for his country.

The Iranian parliament speaker, for his part, said that the Iraqi army backed by the popular forces have succeeded in building a solid dam against extremist forces.

The Iranian parliament speaker pointed to Iraq’s industrial infrastructure, and said, “Development of Iraq and setting up factories can result in that country’s progress and help the Arab country’s security and tranquility.”

In relevant remarks in November, Iraqi Prime Minister Haider al-Abadi lauded Iran for its support and assistance to Baghdad in fighting terrorism, and said he would never be coaxed into destroying or undermining relations with Iran for some short-term benefits.

“I will not spoil my ties with Iran for the sake of certain sides,” Abadi said in an interview with al-Mayadeen news channel.

“At present we are facing a life and death battle and Iran has stood beside us in this war,” he added.

“The ISIL terrorists sought to surround Baghdad but they failed in reaching their ominous goals thanks to Iran’s supports,” Qa’ani said in North Khorassan province.

Noting that the ISIL terrorists had been left with no more command center and were searching for new shelters, he said ISIL was becoming weaker and weaker day by day and was being annihilated.

“We do not see any other option than cooperation and being on the same side (with Iran) to uproot the terrorists,” al-Obeidi said, addressing a joint press conference with his Iranian counterpart Brigadier General Hossein Dehqan in Tehran.

He underlined the need for broadening defense cooperation between Baghdad and Tehran in the campaign against their common enemy.

The Iranian officials have always underscored the country’s support for Baghdad in fight against terrorists, but meantime, said that Tehran plays an advisory military role in Iraq.