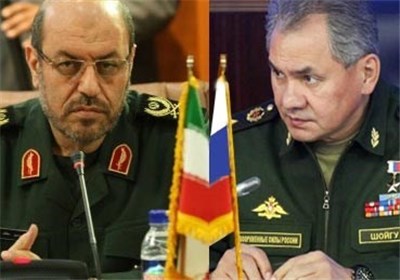 TEHRAN (Tasnim) – Defense ministers from Iran and Russia agreed on Tuesday to push for the settlement of a lingering dispute over Russia’s failure to honor its commitments under a sale contract, according to which Moscow was obligated to deliver S-300 missile batteries to the Islamic Republic.

The agreement was made in a meeting between Iran’s Defense Minister Brigadier General Hossein Dehqan and his Russian counterpart, General Sergei Shoigu, who arrived in Tehran on Monday night.

Under a contract signed in 2007, Russia was required to provide Iran with at least five S-300 defense system batteries. In 2010, then-president Dmitry Medvedev cancelled the contract as he came under strong US and Israeli pressure not to go ahead with the sale of the weapons system, but his pretext was that the sale was covered by the fourth round of the UN Security Council sanctions against Iran.

Elsewhere in the meeting with Dehqan, the Russian minister hailed Iran as a “key country in the provision of security across the region.”

He also noted that military and defensive ties between Tehran and Moscow will greatly contribute to boosting security and stability at the regional and international levels.

Iran and Russia face common challenges and threats, Shoigu added, noting that those challenges could be dealt with through mutual cooperation.

“We place a high value on the Islamic Republic of Iran’s measures for the fight against terrorism and narcotics trafficking, and call for mutual cooperation in this field,” the Russian minister added.

At the conclusion of the meeting, the two ministers signed an agreement on defensive and military cooperation.