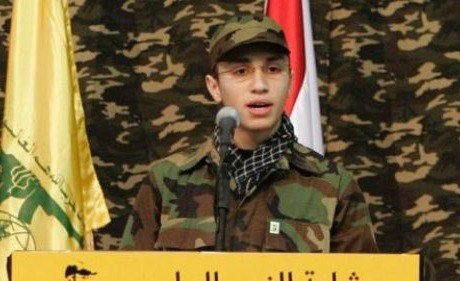 Jihad Mughniyeh at a 2008 Hezbollah rally in Lebanon. AP photo.

ERBIL, Kurdistan Region – Hezbollah officials in Lebanon vowed to avenge a reported Israeli airstrike that killed several key operatives in Syria, as Tehran confirmed that an Iranian general was among the seven dead.

Hezbollah confirmed that Israeli helicopters on Sunday attacked a target in the Syrian Golan Heights, killing six operatives that included Jihad Mughniyeh, the son of top commander Imad Mughniyeh who was assassinated by Israel in a 2008 strike in Damascus.

Lebanon’s As-Safir newspaper quoted a Hezbollah official as saying that the Iranian-backed Shiite group “will not hurry to decide what measures should be taken” to retaliate the younger Mughniyeh’s death.

But it warned that retaliation against the Jewish state “is inevitable.”

The missile strike, which came a day after Hezbollah leader Hassan Nasrallah threatened to retaliate against repeated Israeli attacks in Syria, is a severe blow to the Shiite group. It also threatens to reignite a war between the two: in 2006 Israel and Hezbollah fought a bloody war that killed some 1,200 Lebanese, mostly civilians, and 160 Israelis, mostly soldiers.

In an official statement, Hezbollah confessed that the attack “was a very harsh blow.”

Hezbollah, whose main backer is Iran, was created by Tehran on Israel’s doorstep mainly to fight the Jewish state. However, Hezbollah has increasingly stepped into the Syrian civil war, where Iran backs Bashar al-Assad’s regime and admits to troops on the ground.

“We condemn all actions of the Zionist regime as well as all acts of terror,” Zarif told state-run Press TV on Monday.  “The policy of state terrorism is a known policy of the Zionist regime,” he added.
Meanwhile, Iran’s Revolutionary Guard confirmed that one of its commanders, Gen. Mohammad Allahdadi, was killed in the attack.

It said that Allahdadi’s mission in Syria was to give “crucial advice” to Syrians fighting terrorists, a reference to Sunni rebels and Islamic insurgents involved in a messy civil war that is in its fourth year.