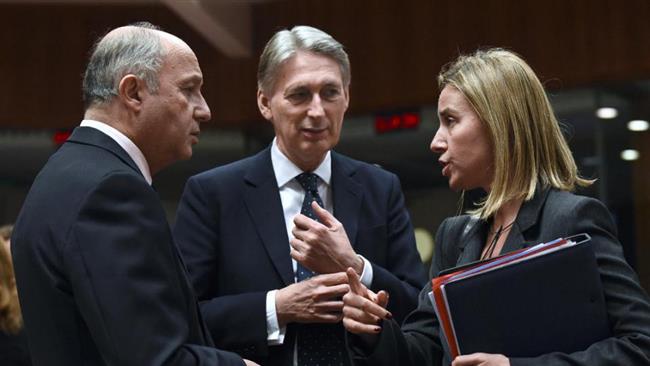 EU agrees to press ahead with Russia sanctions policy

There will be no let-up in sanctions against Russia despite concerns about the economic consequences, the European Union decides.

EU foreign ministers on Monday agreed not to change the bloc’s policy on Russia until Moscow fully implements the September 2014 peace deal reached between the Ukrainian government and pro-Russia forces over the conflict in the country’s east.

“EU foreign ministers agree we must keep sanctions pressure on Russia until it helps deliver peace in Ukraine,” Britain’s Philip Hammond said in a tweet after talks in EU’s de facto capital Brussels, adding, “EU must stay the course.”

A new round of clashes recently broke out in eastern Ukraine, which EU foreign policy chief Federica Mogherini called “not encouraging, rather the contrary.”

“The situation on the ground today is much worse than in last weeks,” Mogherini said during a press conference after the talks.

The United States and the EU have imposed severe sanctions on Russia, accusing Moscow of playing a part in Ukraine’s crisis. Moscow denies any wrongdoing, saying it is opposed to Kiev’s continued suppression of the ethnic Russian population living in eastern Ukraine.

The 28-nation bloc has long been at odds over the Russia bans, as several member states such as Germany and Italy, which have strong trade and political relations with Russia, have not been willing to ratchet up the sanctions after the crash of Malaysia Airlines flight MH17 in July. Western officials blamed the incident on pro-Russia forces who have repeatedly denied the allegations.

The embargoes took effect from March 2014 for a year and the first of them will shortly come up for review. The EU must now decide its next move.