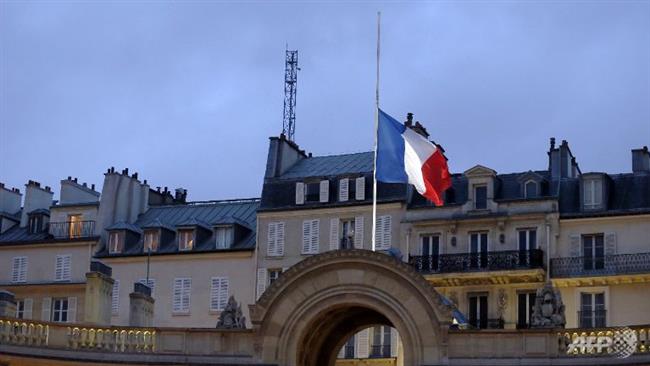 A French flag flies half-mast at the Elysee Palace in Paris on January 8, 2015. (AFP photo)

A drone has been spotted flying briefly over the French Presidential Palace in the central part of the capital, Paris, according to a source at the presidency.

The iTELE channel had earlier reported the incident occurred late on Thursday. The source with the Elysee Palace on Tuesday confirmed the report, saying that the drone spent only “a few seconds” over the palace and was “immediately spotted” by police guarding the edifice.

A probe has been launched into the incident by the Paris prosecutor’s office.

In October and November 2014, a mysterious spate of drone flights was reported over French nuclear plants. However, no one claimed responsibility for the overflights.

On November 5, 2014, the French police reportedly arrested two women and a man near the Belleville-sur-Loire nuclear plant in the Cher region south of the capital in connection with the drone overflights.

Sources said two drones were also confiscated by the police.

French law bans aircraft of all types from flying within five kilometers of nuclear facilities. However, there had been at least 15 reports of drone sighting over nuclear reactors across France last October, raising concerns over the country’s nuclear safety.