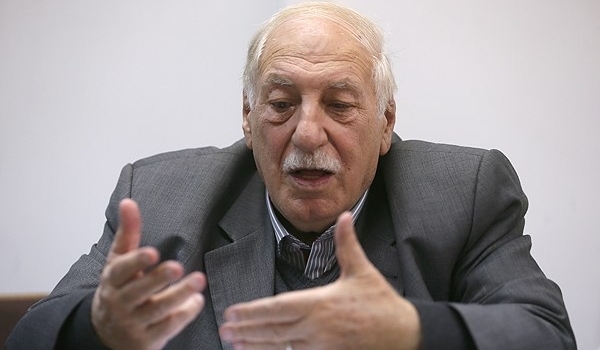 TEHRAN (FNA)- Secretary General of the People’s Front for the Liberation of Palestine Ahmad Jibril expressed pessimism about the results of the preliminary investigations that the International Criminal Court (ICC) has decided to launch into Israel’s war crimes in the Palestinian territories, stressing that the Zionist regime should be stopped by force.

“The entire world is witnessing the Zionist regime’s crimes and these crimes are not hidden to anyone, therefore, we are not hopeful about gaining a major achievement through hiring a lawyer or raising the issue in the court of law,” Jibril said after meeting with Iranian Supreme Leader’s top advisor for international affairs Ali Akbar Velayati in Tehran on Monday.

“When someone approaches you through force and drives you out (from your land), you should confront it only with force as that enemy understands no language but force,” he added.

The ICC opened an inquiry into attacks in Palestinian territories, paving the way for war crimes investigation against Israelis.

In a statement Friday, the court’s top prosecutor said the decision follows the Palestinians’ signing of the Rome Statute.

In doing so, they officially become ICC members on April 1, giving the court jurisdiction over crimes in Palestinian territories.

The preliminary examination allows the court to review evidence and determine whether to investigate suspects on both sides.

“There are no timelines provided in the Rome Statute for a decision on a preliminary examination,” the ICC said in a statement.

Israeli Prime Minister Benjamin Netanyahu described the inquiry as an “outrage,” saying the court is overstepping its boundaries.

The United States also said it “strongly” disagreed with the court’s decision.