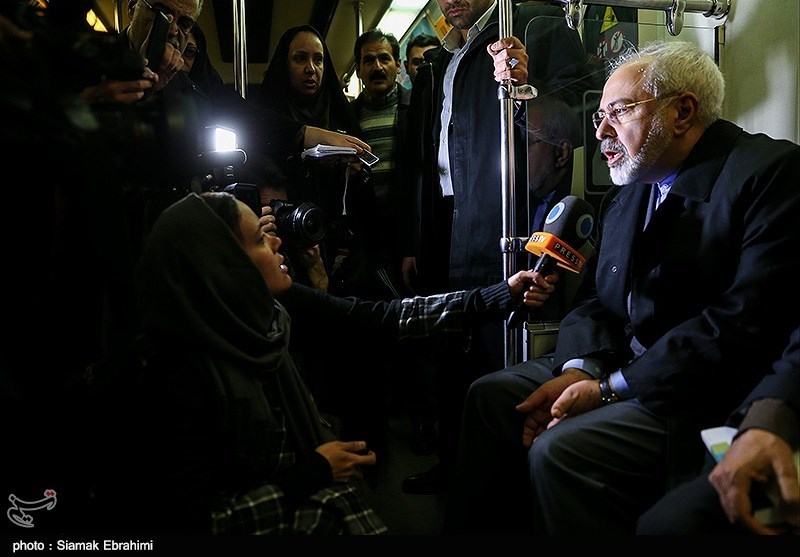 Zarif: Next round of nuclear talks in Davos, Munich

Tehran, Jan 19, IRNA – Foreign Minister Mohammad Javad Zarif said next round of negotiations between Iran and the 5+1 will be held in Davos and Munich.

Talking to reporters here on Monday, he made the remarks when using a Tehran metro line to work.

He used the public transpiration today to mark the ‘Day of Clean Air’ which is celebrated every year in the country on January 19.

Zair also said his talks with American counterpart John Kerry had been ‘open and frank’.

He said the two foreign ministers discussed details and focused on complicated issues.

As it is always customary with international talks, he added, the details are the most difficult part of discussions.

Saying that the overall pattern negotiations are already quite established, Zarif stressed Iran’s right for nuclear enrichment and sustaining its nuclear program as well as the need for removal of sanctions against Iran once an agreement was reached.

For the next remaining months of the deadline, he said, parties involved in the talks have to focus on details.

Details like the number of centrifuges, for example, may take long hours for the experts to be discussed, the foreign minister noted.

‘It is a source of pride for the nation to see that the best Western scientists are spending hours and hours to scrutinize what the young Iranian experts have been discussing with them.’

What Iran has always emphasized, Zarif said, is that the parties in talks with Iran have to admit the fact that they have to stop pressing and bullying if they want to get to any results with the negotiations.

‘They could never indulge in talks and continue their pressures on Iran simultaneously.’

Now, Zarif said, this issue seems to be settled with Iran’s partners in talks as they are just discussing methods now.

The Iranian foreign minister expressed hope that favorable results could be attained in due course of time though it might seem very difficult to achieve.